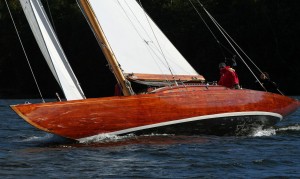 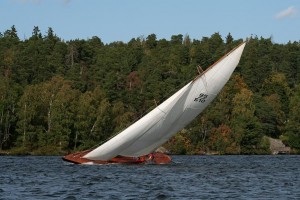 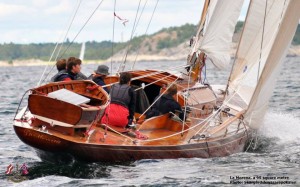 Originally named ‘Roxane III’ the yacht was built in Germany for the Swedish engineer, Frithiof Dahl.   He was a building contractor and is responsible for building Ragnar Ostberg’s famous City Hall in Stockholm.

During the 1920’s and 30’s he raced her against ‘Kerma’ and other famous yachts, usually around Sandhamn and the Saltsjobaden.

When the Graffman family bought her, her name was changed to ‘La Morena’ meaning ‘the brunette’ in Spanish.

She was then sold to Arne Fyrk and Bengt Helgesson in the late 1970’s who moved her from Stockholm to Motala and Lake Vattern where she stayed for the following 20 years.   During that time restoration work was carried out.

Her current owners, who have owned ‘La Morena’ since 2004, undertook an extensive restoration.   They replaced the keel plank, the rudder stem and knee, 50 metres of planking and provided a new stainless steel rudder. The restoration continues(2009). More here.

Brest: the world’s largest maritime festival in photographs by Nigel Pert & Dan Houston with a … END_OF_DOCUMENT_TOKEN_TO_BE_REPLACED