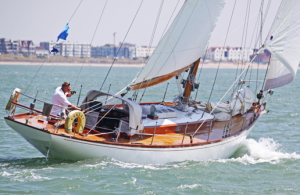 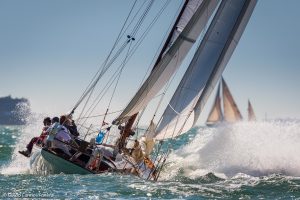 Commissioned by Halvdan Hansen, a highly respected Norwegian yachtsman and originally named “Tamara XI”, she was built in secrecy during World War II to be launched in 1946, from Anker & Jensen’s Yard. Always intended to be an offshore cruiser racer, she performed well up to expectation by winning the first Faerderrace.

She was later sold to a Mr Røed, and again to a Mr Heiberg.

Krabat’s previous owners, Mr. and Mrs Jørgensen had sailed her for more than 30 years until a couple of years ago when she was brought to the English South Coast for her present owner(2016).

“I purchased Krabat from where she was based in Port Hamble in December 2016. Krabat was moved to Italy by truck and is lying in a marina north of Venice in the Adriatic Sea.
An overhaul of the electrical system, instruments and deck has taken place.
Krabat is in excellent condition and has been a pleasure to sail since day one. We sail her regularly.” Alfred Lipp

Brest: the world’s largest maritime festival in photographs by Nigel Pert & Dan Houston with a … END_OF_DOCUMENT_TOKEN_TO_BE_REPLACED