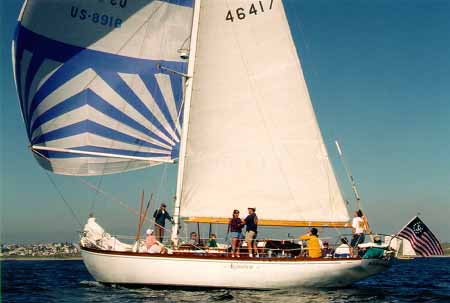 Won the Bermuda Race in 1936 just a month after her launch! It was a particularly breezy race and luckily Rhodes was onboard to encourage the skipper to drive hard into the wind and seas. She won that year and confirmed her place in Rhode’s legacy.

“Built in Brooklyn for Robert P Baruch, a member of the Manhasset Bay Yacht Club, Kirawan launched the prestigious career of the yacht designer Philip Rhodes.

Kirawan eventually moved to California, and in 1993 the film producer Sandy Horowitz purchased her and began an extensive refit under the direction of Tom Adams, a sailor and woodworker. ”I gave Tom carte blanche to do the work, and he took this on heart and soul,” Horowitz said. ”Some people see boats as inanimate objects but this one has a life of its own.”

Now, with a rebuilt interior, hand-cut marble counters and even a rolltop desk, Kirawan is a work of art. And with a seasoned seven-man crew that includes John Rousmaniere, the yachting writer, and John Jourdane, the former Whitbread racer, Kirawan may also have some surprises for the upstarts. ”The nice thing is that she really powers through a swell when those modern race boats are pounding,” Adams said. ”It’s a pretty comfortable ride.”

“Kirawan was later owned by Terry Moore, the wife of Howard Hughes and moved to California. In 1993 she was purchased by a film producer who started a lengthy refit. The interior was redone in California to the highest standard. In 2000 Kirawan again competed in the Bermuda Race, but not to the same winning results. After the race additional work was deemed necessary. The boat was moved to Rhode Island where she began a refit that has included updates to the hull, internal structure and keel. During this work the owner was forced to file for bankruptcy leaving the project incomplete. 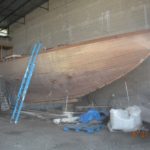 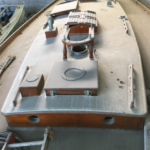 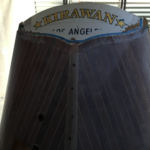 For the past 8 years Kirawan has been in storage. She is currently indoors in a dirt floor building. Her rig is on site and stored inside.”

Brest: the world’s largest maritime festival in photographs by Nigel Pert & Dan Houston with a … END_OF_DOCUMENT_TOKEN_TO_BE_REPLACED