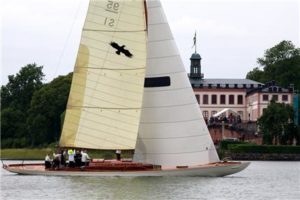 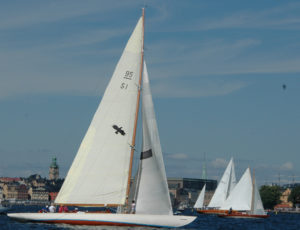 Kerma was restored in 1977 by her current owner, Hasse Wetterberg.   Originally gaff-rigged she is now a bermudan.

Erik Salander’s great success with several attentive and victorious 40s, 55s and 75 square metre yachts in 1917 made him popular. He was commissioned to construct two 95s for the race season of 1918. Both Kerma (S1) and Regina (S3) ) were built in Stockholms Båtbyggeri AB and had pine hulls. Kerma became successful in the regattas and often beat her larger sisters (120s and 150s). Kerma was Salander’s first 95 Square metre and was originally named ‘Gerdny’. The customer was Georg Wrange who after only two years ordered a newer 95 Square Metre, still designed by Erik Salander, and this boat who took over the name Gerdny, which she still owns today.

A restoration was undertaken in 1975. After winning at The Scandal Beauty Trophy Race at Riddarfjärden, she was taken up late 1976 and was relaunched again in 1977. The renovation was carried out by Thomas Larsson and Harry Johans, who had restored the of 150 Square Metre Beatrice Aurore.

In a stiff breeze at Nämndöfjärden on November 6, 1981, Kerma broke the mast, which was made of wood and built in 1939. It was, of course, an adventure in itself to figure out that situation. However, it ran happily and resulted in Kerma getting a new fibreglass mast. It is tailor made for the boat and is both strong and flexible. This, as well as the new 1977 keel, makes Kerma excellent for sailing as reflected on the race circuit. First place 2008 at NSS Sailing Nynäshamn – Visby and Stockholm Yachtclub’s distance race Kräftköret.

Kerma has also received a new 27 hp diesel engine at her 70th anniversary in 1988. The boat sails at least 2000 NM per season. During the summer cruising grounds have included the west and south coast of Sweden and adventuring as far as Finland.

The yacht has twice won the classic class of ÅF Offshore Race (former around Gotland race). In 2015 Kerma sunk the night after she was launched and although she was salvaged just two days later she suffered severe damage that required an extensive refit. She was back racing in 2017 and won the Scandal Beauty Trophy in Stockholm.

Brest: the world’s largest maritime festival in photographs by Nigel Pert & Dan Houston with a … END_OF_DOCUMENT_TOKEN_TO_BE_REPLACED