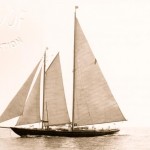 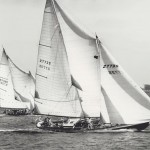 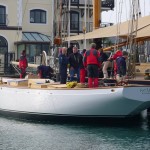 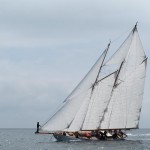 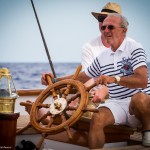 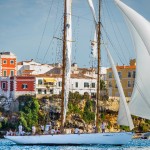 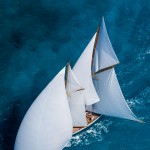 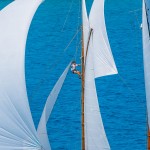 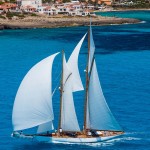 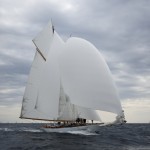 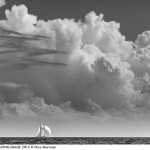 Originally named ‘Hopeful’ and built for the New York stockbroker, Archibald McLaren, on the eve of the Great Depression.

Kelpie did duty in World War II serving with the US Coastguard. She was a popular boat to crew on and notably never missed a day’s service.   Like many other yachts, the end of the war saw a change in ownership and she moved to the West Coast of the states.   Kelpie was in the ownership of the Minney family for over thirty years and undertook extensive cruising through the Pacific to Tahiti and beyond.

In the 1960’s Kelpie was chartered out of California and amongst her other adventures, played host to the film stars Paul Newman and Elizabeth Taylor.   It was during this time that she was converted to a staysail rig and a bumpkin was added to provide a fixed backstay.   In later years the boat was modified to compete on the West Coast regatta circuit and at one point was chartered by Dennis Connor.   She was well-loved and campaigned hard, earning the title ‘fastest schooner in the west’ for breaking a long-standing record in the Newport to Ensenada offshore race.

Kelpie was found on the West Coast of the USA in a state of semi-neglect by Charlie Wroe, the skipper of Mariette.   After purchase she was made ready for sea in San Francisco, California, before sailing back the nine thousand miles to the UK via Panama and the Caribbean.   Kelpie, renamed ‘Kelpie of Falmouth’ upon her re-registry in the UK, is nearing completion (May, 2014) at Gweek Quay Boatyard in Cornwall.   She is undergoing major refurbishment by a team under the management of Charlie Wroe.   Carpentry led by Ken Wilkinson, naval architecture is in the hands of Theo Rye and Pendennis Shipyard are developing the interior drawings.    Kelpie’s sails will be built by James Lawrence Sailmakers. Her two masts are to be overhauled by Jeremy Freeland from Collars of Oxford – who will also be building her four new spars, two booms, a bowsprit and a gaff.   Kelpie will be returned to her original configuration of a Bermudian main with a gaff foresail.   The aim being to restore her as sympathetically as possible whilst doing the utmost to honour her regatta pedigree.   Kelpie’s debut regatta is planned for the Pendennis Cup in May, 2014.

More at the ‘Kelpie Of Falmouth’ Group on Facebook and in a 3 part series of her restoration on Classic Yacht TV. 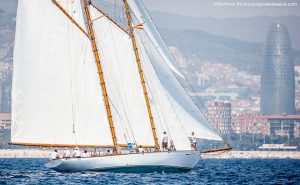 Kelpie of Falmouth at the Puig Vela Clasica, 2015

Brest: the world’s largest maritime festival in photographs by Nigel Pert & Dan Houston with a … END_OF_DOCUMENT_TOKEN_TO_BE_REPLACED