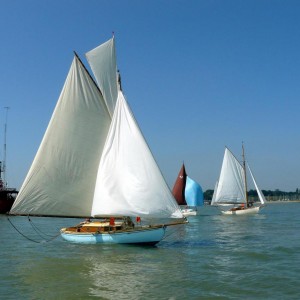 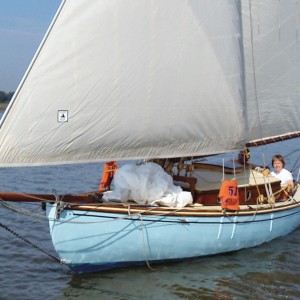 Kelpie II was built on the lines of a J Pain Clark designed yacht called Rani IV, one of a series of Rani yachts and canoes by this designer. She was built in a purpose built shed in Lewisham, South London, by the owner of a joinery business called Herbert E Kennard and launched, from a timber cart, at Greenwich on Saturday 28t June 1902. She cost £76-2-7d to build, which for that time was a great deal of money for a yacht of this size.

She is a canoe yacht, gaff sloop rig, with designed displacement of 4000lbs. She has a plate and bulb keel with semi balanced spade rudder. The boat was advanced for her time featuring roller reefing on both main and jib, also all control lines were bought back to the cockpit, and of course there is the keel. Fin and bulb keels were not that uncommon on racing keelboats but on a yacht it was a bit unusual and, although the plate is new owner, Rik Graham, was very careful when replacing it to maintain the geometry of the original.

The week after Kelpie was launched she started her career cruising the East Coast, from a base at Erith Yacht Club until 1973 but then from Pin Mill. Whilst based at Erith she had a very succesful racing career, particularly in the hands of her builder who helmed her until he was in his 80s. Of course time marches on and H E eventually passed Kelpie II to his son Dave who brought her to Pin Mill.

Dave seems to have used Kelpie II mostly as a day sailer, with the ocasional race, and sailed with a Barry Page who bought her in 1989 when Dave, in his turn, got too old to use her. Barry did some work on the boat replacing one garboard and having the decks plywood and epoxy sheathed but again day sailing, keeping her going none the less.

At about the time that Barry was thinking that maintenance was getting to much for him Rik came onto the scene and became her latest owner in 2004. Four owners in 107 years and never rebuilt, not a bad record.

Brest: the world’s largest maritime festival in photographs by Nigel Pert & Dan Houston with a … END_OF_DOCUMENT_TOKEN_TO_BE_REPLACED