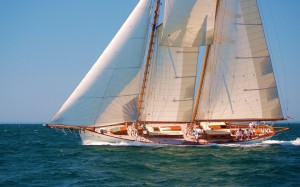 Powering upwind in the 2011 Vineyard Cup 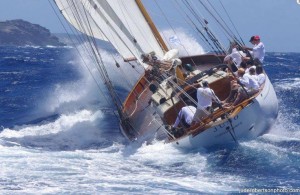 Below article from the vineyardgazette.com

Juno, the 65-foot auxiliary schooner built for Robert and Melissa Soros of New York City and Chilmark, was built at the Gannon and Benjamin Marine Railway Annex.

“Let’s put it this way,” he said, “there’s nothing the same. There may be similarities, but you start with a new piece of paper when you’re building a new boat. This boat is less than a foot wider, it’s eight inches deeper, but it’s seven feet longer on the waterline. So she’s shorter-ended than Rebecca. She doesn’t have as long overhangs, especially in the bow. And the counter” – the angle of the stern below the transom – “is a bit shorter, too, so she probably won’t look as graceful to some people. I think you’d say this boat is definitely huskier. She’s still got a fairly fine waterline forward, which you can do by lengthening the waterline. It helps straighten out those waterlines. You’ll have a higher hull speed.”

There are significant changes below the waterline, too.

“She has a different forefoot [the curve of the bow leading from the waterline down to the keel]. That translates into a whole different shape,” Mr. Benjamin said. Rebecca’s keel then runs flat, parallel to the waterline, but Juno’s continues to curve downward slightly, giving her additional draft for stability. The bottom of the rudder is raised noticeably to keep it from being damaged in a grounding. These are details to a layman, but an entirely different hull form, and thus boat, to people who know them.

Mr. and Mrs. Soros began talking to Mr. Benjamin about the vessel that would become Juno while Rebecca was hardly more than a keel and a parade of floor timbers running the length of the annex. Mr. Soros is deputy chairman of Soros Fund Management and of Soros Foundations, which operate in more than 50 countries in an effort to help change closed societies into open ones.

“They basically wanted a big sister to Rebecca,” Mr. Benjamin said. “A little more space, but similar rig, similar sailing characteristics, something they could charter, but mainly use for their family, their kids and their friends and explore the world.” Mr. Benjamin did some drawings, refined them, drew an interior layout, “kept juggling that around and eventually came up with a plan that seemed to fit their needs. The timing was perfect because Rebecca was launched and under way, and we started on this a year ago January.”

The owners talked about a boat that could take them down the coast of Maine, south to the Windward islands and the Grenadines, east to the Greek islands and Scandinavia. They had clear, sensible notions about what they wanted, Mr. Benjamin said. “It’s just been a wonderful relationship. Great people to work with. They’ve got a lot of good ideas; they’re boat smart, they were especially helpful with sorting out a lot of interior details. They’ve both sailed and lived aboard boats, and so they had certain ideas – some that they didn’t want to incorporate, and some that they did.”

Though Juno is a substantially larger vessel, she was built in less than half the time of Rebecca, whose construction between January 1998 and the end of 2000 was hobbled by prolonged work stoppages for want of money. “That really was a constraint with us,” Mr. Benjamin said. “Considering the constraints, I think we built a really remarkable boat. But that was the hardest thing to deal with.” The company building the schooner – formed by Daniel Adams, then of Chilmark and Oak Bluffs – eventually filed for bankruptcy. Just eight weeks shy of completion in 2001, Rebecca was bought at auction by Pamela and Brian Malcolm of Peebleshire, Scotland and launched in May of that year. Her Vineyard Haven mooring is in the field just off the Steamship Authority wharf, near Shenandoah and Alabama. She is now cruising the coast of Maine.

“I learned a lot from Rebecca,” Mr. Benjamin said. “I was thrilled with the way she operates. She’s a dream to sail. She’s fast, comfortable, very maneuverable, very easy to steer, very user-friendly, which is what I’m looking for with these schooners.” Rebecca, he said, especially taught him which vendors to use and avoid, and Juno enabled him to build a vessel free of the financial limits and travails that the Rebecca project imposed.

Like Rebecca, the heaviest, most durable timbers in the hull and planking are of tropical hardwoods – angelique and wana selectively harvested by Brad Ives of Oak Bluffs in the rainforests of Suriname. But Rebecca’s frames were a composite of two types: double-sawn for strength, and steam-bent to save weight and money. For Juno’s larger hull, all the ribs are double-sawn, using angelique, yellow heart and locust. Rebecca’s hull is single planked and caulked, while Juno’s is double planked with overlapping seams. Rebecca’s water tanks are installed above the cabin sole (or deck); Juno’s are below, in the space created by bronze floor timbers and a wider and deeper hull. This adds to her stability and saves space. Rebecca’s deck is of silver balli, another tropical hardwood; Juno’s is of teak.

But a tour of the new boat shows once more what Mr. Benjamin and Ross Gannon, his boatbuilding partner in Vineyard Haven for nearly the past 25 years, value so much about traditional construction – the beauty and dependability of an elemental, proven design. The decks are free of clutter, the interiors of gewgaws whose only job at sea, it often seems, is to break down when they are most needed. Juno has a small generator, a desalinization plant and refrigerator – but no microwaves, television sets or other extras to corrode, break or decay.

Juno’s masts are being built of Sitka spruce by Jim Elk of Elk Spars of Bar Harbor, Me. Smaller spars and rigging are being built by Myles Thurlow, the 20-year-old West Tisbury boatbuilder who built Mabel, the 28-foot Noman’s Land boat that sailed this spring with seven teenagers and two adults from the Vineyard to an environmental festival 30 miles up the Hudson River and back. Her sails are being built by Steve Sperry of Sperry Sails in Marion.

Her interior, spacious and presently lit by work lights, gleams in the honey and maple syrup hues of new varnish. The spigots are pewter and, though new, are designed to look 50 years old. The overhead is painted white, setting off the varnish handsomely. The old Gannon and Benjamin artistry – the curved edges, the wisely placed settees, tables and lockers, the sense of abiding strength and simplicity wherever the eye falls – is everywhere apparent in her hull and on it.

The cost? Something over a million dollars, Mr. Benjamin said Friday. Had Juno been built of fiberglass by Hinckley or Swan, the price tag would have easily been double that, Mr. Benjamin added. And most of the money would have gone into showroom add-ons, like microwaves and televisions, intended to help you forget that you were sailing around in something built out of plastic.

Brest: the world’s largest maritime festival in photographs by Nigel Pert & Dan Houston with a … END_OF_DOCUMENT_TOKEN_TO_BE_REPLACED