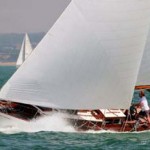 Josephine is designed to “to be worked by her amateur crew, yet having a performance which should enable her to hold her own in any company” (YWA 1956).    She is a typical example of the 1950’s American style yacht with a large cockpit, elegant sheer and well-balanced coach roof and deckhouse.

Josephine was discovered on Long Island, in September 1999, in a run-down state and was taken to Martha’s Vineyard where she underwent an extensive rebuild that included replacing many oak frames.   She was finished in time to be taking part in the America’s Cup Jubilee in 2001 across the Atlantic in Cowes, where she took advantage of her drop keel draft to glide over the shallow waters and avoid the strong Solent tides.

Brest: the world’s largest maritime festival in photographs by Nigel Pert & Dan Houston with a … END_OF_DOCUMENT_TOKEN_TO_BE_REPLACED