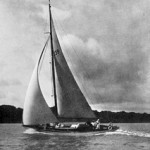 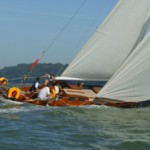 The current (2015) owner, Raymond Plant, gives information on the yacht:

“Built for LH Ryan and she is a sister ship to Serica, Phantom Light and Corinna.

In his book ‘A White Boat from England’, George Millar writes about his voyaging aboard Serica with his wife Isabel and this gives a fascinating account of yachting and the cruising life in the early post war years.

In my search for the perfect boat, I had looked at Phantom Light but was not immediately smitten. I then found John Dory at Mylor Yacht Harbour and immediately knew that this was the right boat.

She has a lead ‘rocking keel’ which I believe to be the transition between the traditional long keel and the more modern fin type keels.

When I bought John Dory in 1984, her wooden mast and double headsail rig had already been replaced with the aluminium masthead rig, which she carries today.

Over the past 20 years or so of ownership, I have thoroughly enjoyed the continuing restoration work and the general up grading of systems and equipment, together with the routine work involved in maintaining a wooden boat. Most of the original features have been retained, including two lovely little seats in the doghouse, which are great for keeping out of the weather when on passage.

Uffa Fox comments in his book ‘Thoughts on Yachts and Yachting’, that a yacht such as John Dory, “will be pleasant to sail under any conditions of wind or sea, make a comfortable cruiser, in which passage making is a pleasure, and will be able to give good sport in handicap racing and also do well under the Royal Ocean Racing Club’s rules”.

I can certainly vouch for all of these qualities, having sailed John Dory extensively along the South Coast, and to the West Country, France and the Channel Islands in perfect comfort and safety.

Since joining the BCYC, John Dory regularly participates in the annual Regatta and other Club events and is steadily re-establishing her racing pedigree. It is particularly nice to sail with other Robert Clark designs such as Cereste, which is another BCYC member yacht and is believed to have been built alongside John Dory at SYW.

I have been very fortunate to obtain some early possessions from previous owners, which include a beautiful half model and an RORC winners plaque and cup for the 1939 Plymouth – La Rochelle Race.”

Brest: the world’s largest maritime festival in photographs by Nigel Pert & Dan Houston with a … END_OF_DOCUMENT_TOKEN_TO_BE_REPLACED