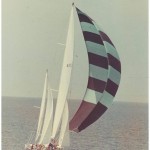 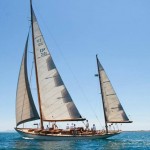 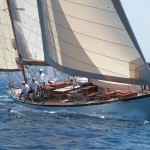 Originally named ‘Havsornen II’ (Sea Eagle) for the Olympic medallist Sven Salen he proved her to be a fast ocean racer by winning many regattas.

Ivanhoe first came to the Mediterranean in the sixties when she seduced another Olympic medallist, King Constantine of Greece, who skippered her succesfully in a series of races before returning to northern waters.

In 1991 she has been restored in Belliure of Spain and after a further 10 years went on to be refitted at Gweek Quay of Falmouth, UK in 2002/3.

Now (2015) Ivanhoe is coming back to the Mediterranean scene and available for anyone wanting to experience classic sailing.

Brest: the world’s largest maritime festival in photographs by Nigel Pert & Dan Houston with a … END_OF_DOCUMENT_TOKEN_TO_BE_REPLACED