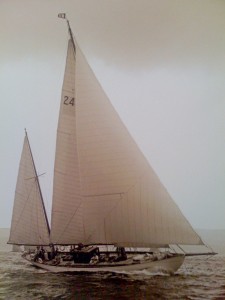 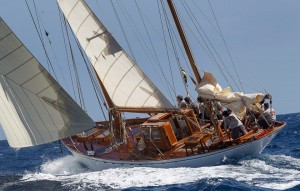 Commissioned for Archibald J Barr of Kilmacolm, he owned her until 1939, and then again from 1950 to 1954.   In between ‘Islander’ was owned by Sir Knowles Edge, an industrialist from the Northeast of England.   In 1954, Barr sold her to Ronald Strauss.

In 1964 Tom Blackwell bought her, former captain of the English Navy and heir of the Crosse & Blackwell dynasty, the famous Scottish sauces founded in 1706. With Tom Blackwell at the helm, the Islander entered a new phase and went on to record many solo circumnavigations. Blackwell sailed alone around the world a number of times in three years, returned to the Hamble for repair, paint and to prepare the ship for the next voyage. Between 1968 and 1971, he sailed her twice around the world solo, and on the third circumnavigation landed at the port of Durban, South Africa, where he spent a few weeks seeking a buyer for the boat.    Finally, he managed to sell her for $ 30,000. 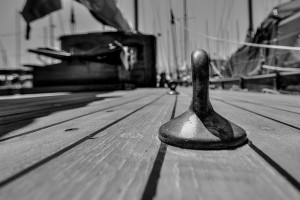 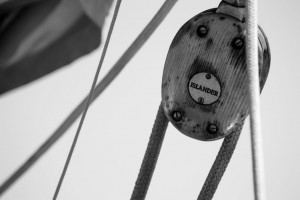 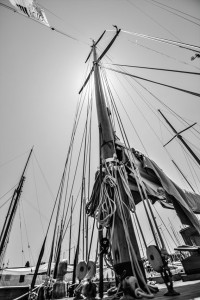 Black and white images courtesy of an article on http://blog.solediesel.com

The new owner, the Durban attorney John P Mathews, recruited a crew to bring the boat to New England (USA) where ‘Islander’ was planned for a refit.   However, in the Canary Islands, the ‘crew’ had problems with Mathews.   After two months of waiting and unfulfilled promises, the employer and the sailors were released and a new team from England took over the ship.   The new crew brought the Islander to Barcelona.   In 1981, Luis Gar found her deserted in Carabela Shipyards of Barcelona and bought her.   In 1989 he sold to Ricardo Albiana, the current owner(2012), since when she has been in Barcelona.   The current owner has started her restoration keeping as close as possible to her original beauty.

“Late 1979 Tom sailed into Durban but was not well . I brought him fresh produce from the farm in Howick and looked after Tom until he was hospitalized at Addington Hospital.On Toms 11th hr , he sold Islander to Mathews who also owned a 30 S&S called Palmyra. The main timber mast is in Point Yacht Club in Durban and the money he got for Islander was donated to fund dialysis machines and cancer society. Tom died of cancer and blamed it on the preservatives in canned food. Islander was re rigged in Durban and was sailed by Henri Hiddes , a very distinguished sailor with a couple of Whitbreads under his belt.” Information courtesy of Boatworx Inc

Brest: the world’s largest maritime festival in photographs by Nigel Pert & Dan Houston with a … END_OF_DOCUMENT_TOKEN_TO_BE_REPLACED