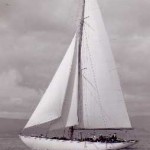 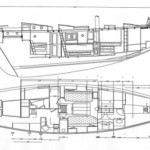 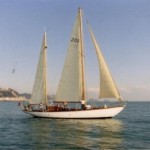 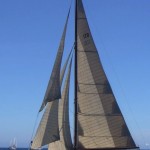 Irina VII back to the original rig

‘Irina VII’ was built for Major JG Allan and was launched in 1935 as ‘Sonas’, which means “happiness” in gaelic.

In 1952 Georg von Erpecom, a Norwegian ship-owner, bought her and changed her name to the present-day ‘Irina VII’.   (He owned the previous six Irinas).   At one point she was converted into a ketch but has now reverted back to her original rig.

Irina was used for sail training by the Island Cruising Club from sometime in the late 60’s (I think).   She was sailed by a skipper and cook/mate with up to 6 crew. Along the south coast from Dartmouth to the Scillies, to Brittany, further south and to the Channel Isles.

‘Originally built as a sloop but while she was at Island Cruising Club she was re-rigged as a ketch.’   In my time, we did a lot of weekly bus runs from Salcombe to the Channel Islands and the N France, but I also took her to Ireland and Biscay.’

Brest: the world’s largest maritime festival in photographs by Nigel Pert & Dan Houston with a … END_OF_DOCUMENT_TOKEN_TO_BE_REPLACED