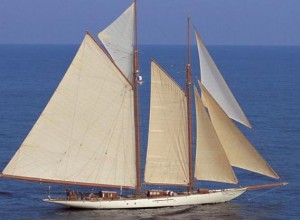 Albert Chesebrough, the designer, is the nephew of Nathaniel Herreshoff, and Invader proved to be a quick yacht winning the Transpac race in 1926. Invader held the record for the best time for 23 years and the 24-hour record until 1977.

“Robert J Decker was first mate on Invader from 1933 to 1935.   At this time the owner was Joseph Schenk and Invaders’ home port was San Pedro”.      David Decker

In 2013 she was based in Barcelona and under Italian ownership, spending 50 days of the year with the owner on board and for the remaining time she is stern to the dock.   They have a small crew and just motor cruise with their fore and staysail only.   The mainsail stays firmly stowed and hasn’t been up in more than 7 years!   A great shame for such a legendary boat.

Brest: the world’s largest maritime festival in photographs by Nigel Pert & Dan Houston with a … END_OF_DOCUMENT_TOKEN_TO_BE_REPLACED