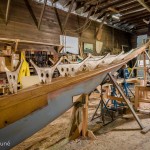 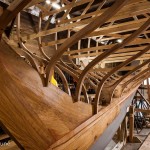 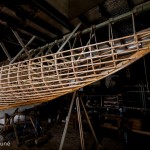 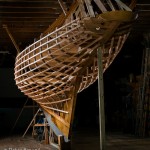 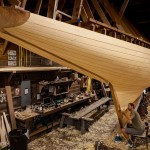 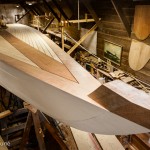 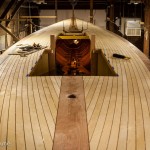 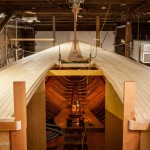 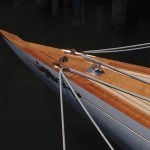 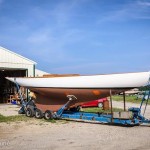 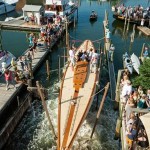 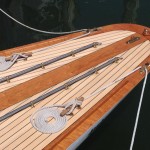 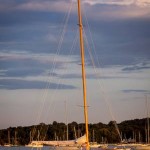 What follows is an article from launch day from The Suffolk Times:

“The yacht is a replica of the famous 1930 Scottish yacht, the Invader II, designed by William Fife III and made for Commodore Gooderham of the Royal Canadian Yacht Club, said Donn Costanzo of Wooden Boatworks, the company which created the ship.

Mr. Costanzo said the original ship was ultimately lost in the Hudson River after it ran into a tugboat in the middle of the night and sunk 225 feet below the waves. But that disappointing end didn’t minimize Mr. Costanzo’s opinion of the vessel, saying that the original was “a very good boat with a great career.” On Friday, revelers hoped the new ship wouldn’t meet the same end.

Following a bagpipe performance recalling the yacht’s Scottish heritage, Mr. Costanzo thanked everyone who helped build the 48-foot vessel. He also introduced the five men who spent the last 18 months working on the Invader — Beattie Hayes, Ben Bentley, Scott Braseth, Steve Lubitz and Mr. Javidi. The men, along with the bagpipe player and two of their sons, were aboard the boat during its christening ride. Mr. Costanzo’s wife, Linda, christened the boat by breaking a bottle of champagne on its bow.
“To this gorgeous, beautiful vessel: may you and all who sail on you be kept safe and free from harm,” she said.
“I felt like everybody felt — thrilled,” Mr. Costanzo said after the event.”

TUNING IN the 8metre INVADER from Tom Nitsch on Vimeo.

Brest: the world’s largest maritime festival in photographs by Nigel Pert & Dan Houston with a … END_OF_DOCUMENT_TOKEN_TO_BE_REPLACED