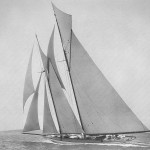 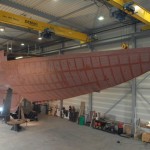 ‘Ingomar’ was one of the first of the nine great Herreshoff (NGH) steel-hulled schooner yachts. She was designed and built the same year as ‘Reliance’ in 1903. Before ‘Ingomar’ all the big Herreshoff sailing yachts had been single-stickers, consisting mostly of the America’s Cup boats.

By commissioning ‘Ingomar’, Morton F Plant persuaded NGH that schooners, too, had merit. In his notes, NGH calls ‘Ingomar’ a “wonderfully good schooner” that easily proved the fastest of her type.   He wrote that he had sailed on her a few times and was well pleased. Charlie Barr, who had sailed ‘Reliance’ to victory in the summer of 1903 when both yachts made their debut, became ‘Ingomar’s’ skipper the following season, and he, too, was well pleased.   Writing to NGH, after a 1904 trans-Atlantic crossing, he said: “Ingomar is as good a cruising yacht as you will find any-where”.

1.The final flight of ‘Ingomar’s’ final section was successfully completed on March 29th, 2012.   81 years after ‘Ingomar’ was lost on the shoals of the Frying Pan of the Cape Fear coast of North Carolina, she’s back and what a sight!! Now her hull is together we got a first look at the clean and graceful shape Nathanael Herreshoff designed back in 1903. The van der Graaf brothers did a great job recreating her, dedicated workmanship and clearly showing pride and passion for the project that was trusted to them.

Brest: the world’s largest maritime festival in photographs by Nigel Pert & Dan Houston with a … END_OF_DOCUMENT_TOKEN_TO_BE_REPLACED