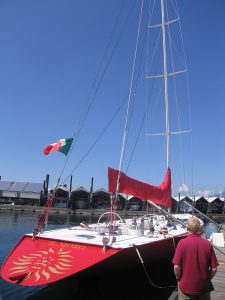 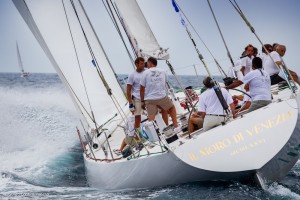 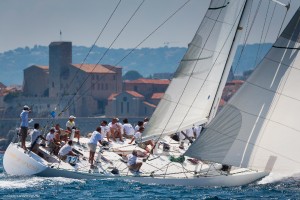 Il Moro di Venezia I (ITA-1) sailed as a trial boat for two years and competed in the 1991 IACC World Championships, later becoming the sponsor platform for the syndicate. In 1994 she was bought by a Russian team that raced her in the 1994 IACC World Championships but never made it to the 1995 Louis Vuitton Cup competition. Repossessed by a bank, she was bought in 1998 by a Chicago businessman who installed an engine and sailed her for a couple of years in San Diego before she once again fell victim to the bank. Tina Kleinjan and John Sweeney bought her in 2001, adding her to their fleet of IACC boats in San Francisco. They completely restored her with new paint and rigging and raced her against other IACC boats in San Francisco bay. She was sold in 2006 and was then moored in North Vancouver.

Brest: the world’s largest maritime festival in photographs by Nigel Pert & Dan Houston with a … END_OF_DOCUMENT_TOKEN_TO_BE_REPLACED