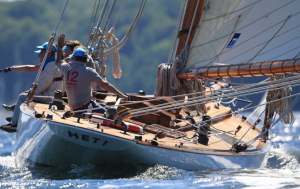 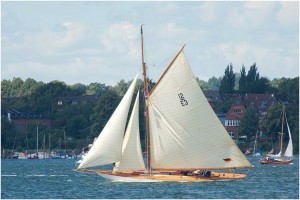 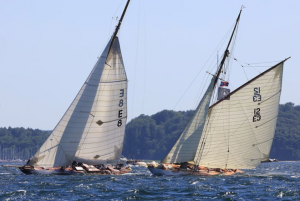 Built for Hermann Eschenburg, Heti was the first 12-Metre designed by Max Oertz for a German customer.   She was built according to the First International Rule and raced in Kiel Week.   After WWI she was sailed to Berlin, altered to a yawl rig and used on inshore waters.

Over the years she was bought and renamed no fewer than seven times.   In 1978 she was bought by Friederich Goebel who named her ‘Romeo’ and raced her in the Mediterranean regattas in the vintage class.

During the Imperia Regatta of 1998 she was involved in a collision with another Oertz yacht, the 37m schooner Aello, and was dismasted.   As a result she was donated to a scheme for young craftsmen in Hamburg with the intention of a complete restoration back to her original design.   In 2001 she was under the ownership of the Hamburg Maritime Foundation and  has since been brought back to her stunning appearance of years gone by.

Brest: the world’s largest maritime festival in photographs by Nigel Pert & Dan Houston with a … END_OF_DOCUMENT_TOKEN_TO_BE_REPLACED