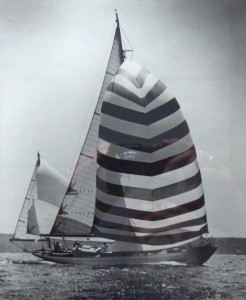 Helgoland was a German sailing racing yacht, seized by the Royal Navy after the War and transferred to the Royal Canadian Navy in 1953, restored and became a sail training vessel replacing HMCS Oriole at HMCS Shearwater in Dartmouth (Halifax).

She participated in the Newport-Bermuda races and the Marblehead to Halifax races for many years.   As a German vessel she won the New York to Spain race, Bermuda to Netherlands race in 1939 and won the Hawke Trophy, between Harwich, England and Bermuda Round Trip.  Renamed Pickle for the RN she won the Fastnet Race.

From the book “The History of the Helgoland”

“The impression one gets from these plans is that they have been drawn by a man with a thorough knowledge of the sea and that the vessel can come straight from the builder’s yard into the race capable of winning it, or she can sail straight from the builder’s yard round the word, for these plans, without doubt, represent a very fine cruiser that would also make a good ocean racer, a vessel on which men can live in comfort for months on end. Seaworthiness, speed and comfort all combine to make her a perfect little ship.”

Helgoland was a yawl designed by Henry Gruber of Germany in 1936 and was built at the naval yard Burmester Yacht of Bremen. From the onset, she was a race winning sailing vessel and in 1939 she was the first German sailboat to win the “Hawke Trophy” putting to end 40 years of British supremacy in this race. With the onset of WW II, she was transferred to the Kreigsmarine as a school ship. After the war, the Royal Navy took over Helgoland as a war prize and renamed her Pickle to honour the sailing vessel that brought back the news of Nelson’s victory at Trafalgar. The Royal yacht Squadron used in as her predecessors did and in 1949 she won “The Fastnet” now called the “Channel Race”. The RN did not have the funds to maintain a vessel of this class and after a short period she began to deteriorate. The decision was made to gift her to the RCN who at the time was better financially placed to maintain her.

In 1953 the Pickle was gifted to the RCN by the RN. After inspection she was deemed not worthy of a transatlantic voyage and was hoisted aboard the carrier HMCS Magnificent and transported to Halifax. The Pickle was given to HMCS Shearwater where she sat for a year and a half when it was decided to transfer her to the Sail Association of the Canadian Navy. Before the transfer was done, she had to be repaired and restored and by June 1955, the Pickle was ready to take to sea again.

There was never a shortage of volunteers to man the Pickle and while her primary focus was training, she was participated in several races: The Marblehead to Halifax Race from 1957 to 1970; the Century Transatlantic Race of 1968 between Bermuda and Travenmude, Germany; and the Transatlantic International Race between Newport, Rhode Island and Cork Ireland in 1969. She won the Bermuda Race five times in 1955, 56, 67, 62 and 64. The Pickle was used to teach future navy officers to navigate, make contact with the sea, acquire the art of sailing and promote the Canadian flag.

In 1972, Pickle represented Canada and the Canadian Navy at the Olympics in Kiel, Germany. Soon afterward, it was determined the the Pickle was too expensive to maintain and a potential buyer was sought. She was purchased by Mr. Norman Gowland, from Toronto, Ont, who had the intent to restore her. He moved her to the James D. Rosborough shipyards, where, after experiencing financial difficulties, he abandoned her. James Rosborough new of the Pickles history and tried to save her. She was slowly deteriorating in the shipyard and steps had to be taken before she sank at her moorings. He contacted Mr. Gowland and permission was given to sell the Pickle.

In 1984, René Renaud, a fisherman from Bonaventure, on the Gaspé coast in Quebec, purchase her. After having divers removed 5 inches of seaweed and barnacles, he had her towed to Paspebiac, Que. The restoration lasted two years. The Oregon pick deck was completely removed and rebuilt. Some hull planking was replaced as well and the engine, transmission and sails – for a cost of $95,000.00.

Renamed Helgoland I in 1986, she re-entered service in the Baie des Chaleurs, was operated between Bathhurst, NB, Baie Comeau, Que and Miramichi, NB. Mr. Renaud petioned the Que government for funding to help cover the cost of her restoration, but all requests for grants wnet unanswered. In 1990, after exhausting all resources to keep her in operation, René Renaud had to to sell the Helgoland I.

In the summer of 1990, Julien Chevarie, a fisherman from Nouvelle, on Baie des Chaleurs, bought the Helgoland I and brought her to Carleton where he sailed her during the summer for cruises on Tragadigache bay. That fall, he had her full sandblasted and found most of the planking was rotted around the holding down bolts. Determined to restore his dream, he spend over $100,000 to restore the hull, but pasted away in 1993 before realizing his dream. After several years and attempts to raise funds, the Helgoland I was sold to Mr. Michel Tadros, from Madeleine, Que. around 1996-97.

At a cost of over $500,000 (Cdn),Mr. Tadros restored the Helgoland I. Her deck was replaced with Oregon pine, the hull coated with epoxy inside and out. The sails were replaced; the engine rebuilt and a new transmission installed. She was inspected by the Coanadian coast Guard and classed as a sightseeing/whale watching vessel for 38 persons. After one season, her owners put her up for sale.

Brest: the world’s largest maritime festival in photographs by Nigel Pert & Dan Houston with a … END_OF_DOCUMENT_TOKEN_TO_BE_REPLACED