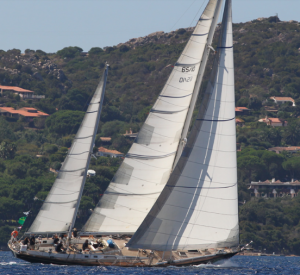 Hardship III is number 10 of the 65 footers from Swan and was built by Nautor in April 1974.

1974
The boat is launched under panama flag, named “Tauranga II”, Italian owner. She had a famous Italian captain who had experience of Swan yachts from the Whitbread race.

1975
The yacht was sold to a French architect, famous in French yachting circles and his racing skipper was Eric Tabarly. Name changed to “Coriolan III” and under French flag. Racing and sailing in the Mediterranean.

1982
The third owner was a Greek ship owner who renamed the yacht “Irene S” after his daughter. Cruising and racing in the Aegean Sea under British flag.

1992
The yacht was sold to an Italian fashion designer. He owned the yacht for nearly 14 years. The name became “Coast to Coast” and remained under British flag.

1993
First major refit. The yacht has been completely renewed, preparing her for big passages and luxury charter.

1994|
Atlantic crossing, charter in the Mediterranean and in the Caribbean sea.

1996-2005
Coast to Coast was sailing, cruising and chartering all around the Med, being constantly upgraded and maintained.

2005
The yacht is sold to an Italian film and TV production manager, maintaining her name under Italian flag. A second complete refit was carried out bringing her back to sparkling conditions. In the following years, the yacht was cruising in the Med, and participated three times to the S&S Swan regattas, winning two editions and being first amongst the participating 65’s.

The yacht was bought by the present(2015) owners in 2014 and is being kept on the island of Mallorca.

After another refit during the spring and early summer Hardship III participated successfully in the 2014 Swan Rolex Cup together with 5 more 65s and more than 70 other Swans.

Brest: the world’s largest maritime festival in photographs by Nigel Pert & Dan Houston with a … END_OF_DOCUMENT_TOKEN_TO_BE_REPLACED