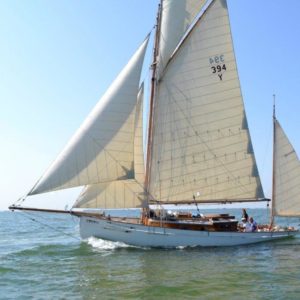 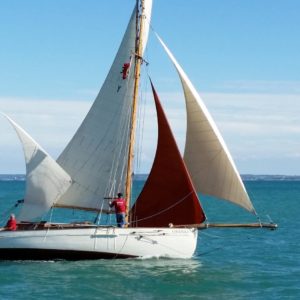 Martin Goodrich, owner since 2004, reports on his research.

I bought Gwenili in September 2004 from Graham Bushell who had her for two years. He is a Harbour Master at Woolverstone Marina on the river Orwell near Ipswich. He acquired her from Brian Humby who bought her in 1955 when she was laid up in a mud birth at Bucklers Hard. The process of buying her and sailing her to the Orwell was part of his honeymoon. Brian was a teacher in Ipswich. He was her custodian for some for 47 years and kept her at Pin Mill where he was a member of the Pin Mill Sailing Club. There is a good painting of Gwenili in the club house and her name is inscribed on Club cups. Brian and the boat were well know sailing characters in these waters.

Essentially a cruising vessel, Brian kept her sailing with his young family as he made trips around the East Anglian coast, Dutch waters, the Channel Isles, the Scillies and the Western Isles. He looked after her very well and kept her sailing every year except 1971 when he undertook major work replacing the rusted away steel strap floors with heavy oak floors which stopped her leaking.

In 1984 her worn out Thornycroft 2cyl Handy Billy was replaced by a 38hp BMC diesel. Brian and his wife was sailing her well into his 80s. Brian had no information of the previous owner, I did meet up with his son who sailed with his father and is the chief Harbour Master at Wooverstone Marina who said the owner was in the RAF and the boat might have formally been called ‘Piros’. In his time Brian changed the sails to tan and spars were painted with white tips to give her the appearance of a working boat on the east coast.

In Feb 2007 I participated in the Frost Bite race on the river Thames and a photo appeared in Classic Boat of Gwenili. I was then contacted via the editor by Michael Godley who thought he recognised the photo of Gwenili as a boat he crewed on in the summer of 1939 when he was 14. By exchange of photos we established it was the same vessel. He informed me that she was owned by Michael Fellowes who was in his early twenties. He had met them at Belsay Castle in Northumberland as a guest of Mrs Middleton. So in the summer of 1939 while sailing in Britany they had to return in a hurry as war had been declared and they rushed to join up, Michael and Michael Fellows both joined the RAF. The owner’s father was Air Commodore Fellowes who in 1933 led the first successful flight over Everest. Michael also wrote a log and took photos of his sailing holiday to Brittany which I have copies of.

In recent times I have been sailing on the UK East Coast participating In OGA rally events, Holland and North France. I have maintained a programme of restoration to keep her up to scratch. In 2007 I improved her sail area and fitted new sails which has made a considerable improvement to her sailing performance and handling as well as improving her deck and gunwale. I have also made every effort to return her appearance to a cruising yacht with her rather fine and elegant lines.

She has undergone fairly major works at St Osyth Boatyard working with Shipwright Alan Williams including new stem, starboard garboard and strake above, new rudder and propeller, re-caulking and re-fastening where required and new engine sump,diesel and water tanks.

In March 2011 I replaced the old BBC 1500 Engine with its attendant oil leaks for a 37hp Nannie/ Kabuto Engine. Half the physical size with twice the power, this has been a considerable success increased my cruising range by 50/50 sailing. Also the reduction of the engine size in the doghouse and has inspired me to consider increasing the size of the cockpit creating more room, comfort and all round vision when sailing.

In the winter of 2012 at St Osyth Boat Yard we undertook extensive maintenance work including two thirds re-caulking, replaced half plank below waterline on port side, planking repair on starboard side above waterline. We also refastened hood ends at the stern, refastened and re-galvanized all chain plates, repainted four coats all round and made repairs to cabin beams and coamings. Finally we fitted a new doghouse and cockpit, re-paying all deck seams.

I have found out more about her early French history and when she first came under the British Flag and I have a log and photos by Michael Godley at Carantec Brittany August 1939.

In the summer 2012 I sailed to the west coast of France, including Brest and Douarnenez Festival, then down to Bordeaux via La Rochelle. Gwenili over-wintered in La Rochelle as I unfortunately contracted cancer.

In 2013, having recovered from my illness, I sailed her back to Brightlingsea in August via Cowes and the OGA50 celebrations. In 2014, I sailed Gwenili to the Netherlands to take part in the Dutch Anniversary Tour.

In 2015 Gwenili returned to France, in company with several other OGA members from the Netherlands and UK to celebrate in St Malo with the Vieux Greements de France. Following on from this, we took part in the Branlebas Regatta. As well as the Groupe Giboire trophy for 2nd place, Gwenili received a special award: Trophée Raymond Labbé  in recognition of her overall performance, classic lines and restoration. Martin Goodrich went to France to receive his award on 2 December 2015.

Information courtesy of the OGA

Brest: the world’s largest maritime festival in photographs by Nigel Pert & Dan Houston with a … END_OF_DOCUMENT_TOKEN_TO_BE_REPLACED