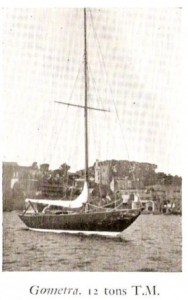 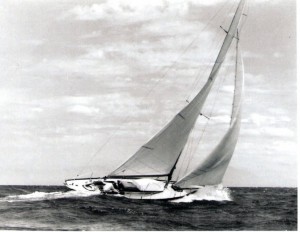 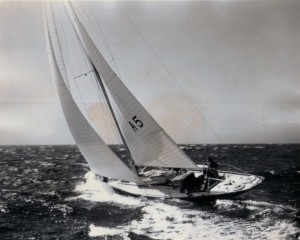 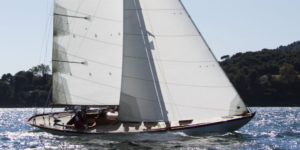 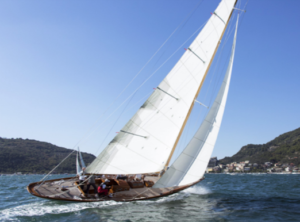 Commissioned to Alfred Mylne by Admiral James Farie in 1925 for British coastal waters, Gometra bears the name of a small island off the coast of Mull. She began her racing career in the American Firth of Clyde based in Port Bannatyne. In 1928, during the West Highland Race to Inverary, Admiral Farie, a widower, met his second wife and in 1930 Gometra first sailed south to Falmouth in Cornwall and then to Lymington in Hampshire where, Unfortunately, she proved too big for her mooring on the river.

Gometra was then purchased by Lieutenant William Blaine Luard, a talented sailor, navigator and writer who praised the virtues of sailing Gometra in his book “Where The Tides Meet” . Gometra later became the property of Leonard Reynolds and was moved to the Menai Straits, near Bangor in North Wales. It was probably at this time that some changes were made, and her sides were changed from the original blue to white.

In 1939, at the outbreak of World War II, Gometra was reported in Scotland, Greenoco near Glasgow, was owned by James F. Lang but when Norway was attacked by the Nazis Gometra’s fate became clear. She was chosen to carry the Norwegian gold reserves to safety in Canada. Bra Kra and his crew were ordered to continue sailing to safety in the event that the cargo were sunk by a U-Boat. (Focus)

Once arrived in Halifax and having completed the mission by transporting the precious cargo out of Hitler’s reach, she was bought by Commodore of the Nova Scotia Royal Yacht Squadron, Ernes A. Bell and began to earn the praise of many sailing enthusiasts including Charles Rawlings. The latter wrote about Gometra in an article for the magazine Yachting Magazine in 1941. Rawlings and the then skipper of Gometra, the famous naval architect William J. Roué struggled not just to rebuild her troubled history.

After the war Gometra was purchased by Gus Ortengren and made her way to the west coast with the Canadian Pacific Railway. In 1948 she was owned by Elmer Palmer and Kenneth Glass and underwent a major restoration. It was during this period that in 1952 the naval architect Ben Seaborn designed the new sail plan and restored the hull to its original deep blue. She spent many happy years as the flagship of the Royal Vanocouver Yacht Club participating in the series of annual Swiftsure Race. Often such events as these, saw guests on board.

Elmer Palmer sold Gometra in 1968 to Alec Manson who kept her at the Royal Vancouver Yacht Club until 1973 when he ceded her to the Scottish-born David Millis involved in the trans-Pacific race of 2300 miles from Canada to Hawaii-Maui Victoria in 1976 and Swiftsure races in 1978. He made a small odyssey between Canada, Hawaii and California that led Gometra to the waters of Mexico. In her new base in Baja California, Gometra continued to attract admiring glances and triumph in the home race, Bandaras Bay International Regatta.

The owner’s health problems meant that Gometra was left inactive in the ‘black hole’ of La Paz, “Port of Illusions” where Molly Holt made her acquaintance. After a year of work, despite the interruptions due to hurricanes Ignacio and Marty and with the help of his friend Yohan, Molly, together with two sons Ishbel and Arran and his faithful dog, were ready to leave for a cruise on the Sea of Cortez.

From that moment Gometra has traveled about 2500 miles off the coast of Mexico, Guatemala and El Salvador. She then remained for some years in Bahia del Sol after the sons of Molly were “mutineers” demanding a less nomadic life. In 2006 Gometra was shipped back to Europe arriving in Toulon, from where she sailed to Nice… But that’s another story…

Brest: the world’s largest maritime festival in photographs by Nigel Pert & Dan Houston with a … END_OF_DOCUMENT_TOKEN_TO_BE_REPLACED