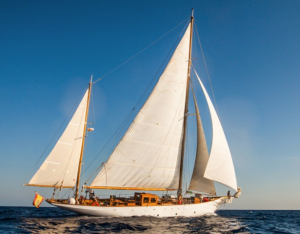 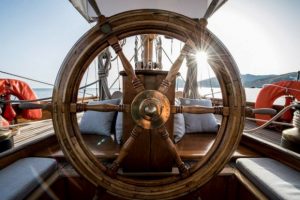 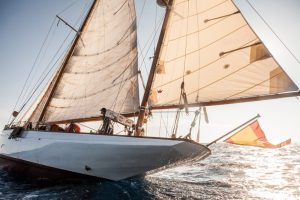 Originally named ‘Gladoris II’,  she was commissioned by an English lord ‘Marconi’ who sold her almost as soon as she was built to an American.

“My grandfather, Mr. Vittorio Branzoli Zappi, bought Gladoris II in the sixties and brought her from England to Naples. He told me, when he was still alive, that he had to change all the sails due to the heavy cloth used, too heavy for the local winds.

He owned the yacht for many years and he never used it for commercial purposes but only for his own private pleasure, he would have never allowed anybody else than family members to use his yacht.

When the yacht was owned by my family it was in perfect conditions and used only for cruising purposes with the crew always on board to take care of the boat.”

She changed name to ‘Conti Bernardi’ when the Azienda Agricola Conti Bernardi bought and restored her at the Cantieri Valdettaro in La Spezia, Italy.  She still has many of her original parts including her helm and compass binnacle and some of the interior’s mahogany panelling.

– She was present at the Coronation Review of the Fleet by Her Majesty the Queen at Spithead on 15.06.1953; Princess Margaret and other members of the royal family were present too.
– The english lord (Marconi) was a cousin to the royal family.
– The american was William Waldorfalors, the owner of the famous Waldorf Astoria New York.
– Gladoris II has her original name back since she was bought by a German (Burkhard Schürger).

Brest: the world’s largest maritime festival in photographs by Nigel Pert & Dan Houston with a … END_OF_DOCUMENT_TOKEN_TO_BE_REPLACED