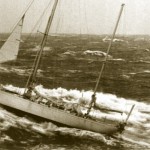 On her Round The World Voyage 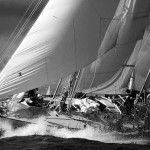 Gipsy Moth IV is a key part of Britain’s national maritime heritage, and represents a significant milestone in the history of world sailing. Sir Francis Chichester sailed her singlehanded around the world, stopping just once in Sydney, completing the voyage in 226 days at sea. Sir Francis achieved his objective of completing the voyage in a time comparable to those of the great wool clippers – no mean feat for a boat of around one quarter of the size and being sailed singlehanded.

By the end of the voyage Sir Francis had established a number of records:

On May 28th 1967 when Gipsy Moth IV returned to Plymouth, there were more than 250,000 people there to witness this historic event, and millions more watching on television.  As well as the technical achievements and records, he had also proved that with courage and self-discipline you could achieve amazing feats, and his efforts inspired a generation to break out and realise their dreams.

She was never sailed again after returning home but took up her concrete dry dock in Greenwich next to the Cutty Sark, only to leave it briefly for some restorative work in 1997. Spending nearly 40 years in dry dock, she was in a poor state of repair. After Yachting Monthly’s extensive 18 month ‘Stop the Rot’ campaign, UKSA formed a partnership with the magazine and together worked to restore this classic yacht. Following 5 months of incredible effort, Gipsy Moth IV was once again re-launched at the Camper and Nicholson yard in Gosport on the 20th June 2005.

With Gipsy Moth IV fully restored to her former glory and re-launched on 20th June 2005, she was ready to embark a second circumnavigation. In contrast to Sir Francis Chichester’s original voyage in 1966-67, this time the focus is not setting records, but to change the lives of those involved and provide a window on the world via use of groundbreaking technology as GMIV undertakes this historic voyage.

The voyage started in September 2005 and took 22 months, via the trade winds route, incorporating 25 countries and 32 official stopovers, covering over 30,000 nautical mile s in the process.

“On April 29, 2006, after a navigational blunder, Gipsy Moth ran aground on a coral reef at Rangiroa, an atoll in the Tuamotus, known as The Dangerous Archipelago in the  Pacific Ocean. She was just 200 miles (320 km) from her next landfall, Tahiti. The yacht was seriously damaged. After six days, a major salvage operation was undertaken with Smit, the Dutch big ship experts who were called in by the UKSA, with local help from Tahiti and Rangiroa. After a day-and-a-half spent patching up the holes in the hull with sheets of plywood, the yacht was successfully towed off the reef into deep water on a makeshift ‘sledge’. She was towed to Tahiti and put on a cargo ship to be taken to New Zealand. In Auckland, Grant Dalton’s America’s Cup team donated help and premises at their HQ in Viaduct Harbour, and the yacht underwent a second restoration. After two weeks or so she was sailing again on 23 June 2006″. (Wikipedia)

The crew changed for each leg, with 3 young adults aged between 16-23 from disadvantaged backgrounds or suffering from learning difficulties or suffering from cancer, accompanied by a Skipper, 1st & 2nd Mate.   For many this was a chance of a lifetime, providing an opportunity to learn new skills and to grow as individuals within the constructs of a working crew.

In 2010 Gipsy Moth IV was bought by East Anglian business partners Rob Thompson and Eileen Skinner in order to keep her in the UK – and keep her sailing – and the next stage of her life had begun.

In 2011 ownership has been transferred by Rob and Eileen to the Gipsy Moth Trust in order to protect and preserve her future and to inspire future generations.

Brest: the world’s largest maritime festival in photographs by Nigel Pert & Dan Houston with a … END_OF_DOCUMENT_TOKEN_TO_BE_REPLACED