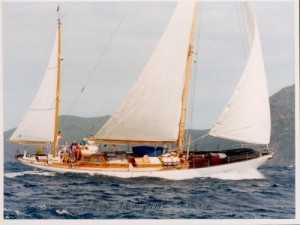 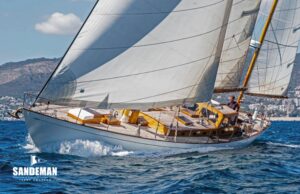 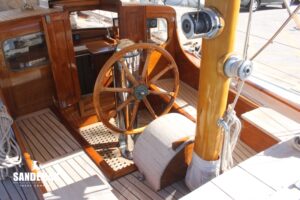 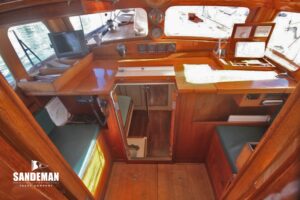 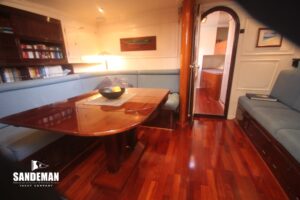 The first of this name; ‘Germania I’, commissioned by the Krupp steel dynasty and designed by Max Oertz was built at Friedrich Krupp Germaniawerft. This 47 metre schooner raced successfully in the Solent against Edward the Prince of Wales’s Britannia and Kaiser Wilhelm’s ‘Meteor’.

In 1955 the passionate and experienced sailor Alfred Krupp commissioned Abeking & Rassmussen to build ‘Germania V’ in steel as a 13 KR Yawl – a fast ocean going racing yacht with plenty of comfort also for cruising. Her racing career started in 1956 with “Kiel week”, the Round Skagen and numerous regattas in the Baltic and North seas.

In 1960 she took part in the New York – Bermuda race followed by the Transatlantic Bermuda – Skagen Race finishing third after Ondine and Barlovento and ahead of Escapade and Drumbeat. The following year she joined the Buenos Aires – Rio de Janeiro race.

In 1963 Krupp commissioned the first ever aluminium built racing yacht – again at Abeking & Rasmussen and donated Germania V to the DHH (German High Sea Sailing Association). As a training yacht she participated with some success in numerous regattas.

Her next owner Mr Talbot sailed her as a private yacht for six years in the Med, Caribbean and in United States waters giving her also a major refit before he commissioned a 100′ schooner.

Since 1991 the current owner has sailed Germania V as a private yacht in the Baltic, North Sea, Caribbean and the Med. Since then she has been regularly refitted and updated.”

Brest: the world’s largest maritime festival in photographs by Nigel Pert & Dan Houston with a … END_OF_DOCUMENT_TOKEN_TO_BE_REPLACED