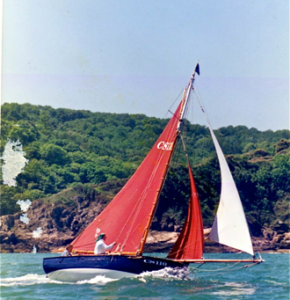 Restored in 1994 at Baltic Wharf, Totnes by Earl de Blonville FRGS, of Royal Dart Yacht Club.   She had a new boom, lengthened mast, bowsprit and metal bumpkin, with all new standing rigging, with deadeyes, as well as iron spreaders above the hounds.   All new wooden blocks and running rigging, with new mainsail, jib and tow foresail by Chris Spencer Chapman of McKillop Sails.   She kept her original rear fish deck while the bitts and tiller were replaced with Devon oak, grown to shape.

Freda was Queen of the River, and led the Parade of Sail, during Dartmouth Festival 1995, being the oldest boat on the Dart.   She won the Concours d’Elegance at Plymouth Classics 1996, competed successfully in the 1996 Classics at Looe, Falmouth and Dartmouth.   At Looe and Falmouth events, storms reduced the fleets and Freda was one of few that finished.   She was third in Falmouth and Looe.   Her owner sailed her single-handed to both events and raced there with a scratch crew.   In 1997 she won the inaugural Brixham Working Boat Classics, starting last over the line, overtaking the entire fleet and winning by a country mile, proving the excellence of Dan Hatcher’s original design.

Brest: the world’s largest maritime festival in photographs by Nigel Pert & Dan Houston with a … END_OF_DOCUMENT_TOKEN_TO_BE_REPLACED