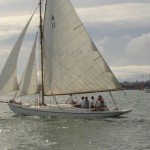 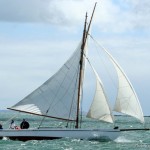 ‘Frances’ first owner was an Austrian-born Auckland storekeeper who used her primarily as a fishing boat.   In 1909 she was acquired by Robert Shakespear, a former employee of the Logans who had helped to build her, and he and his family used her for many years carrying wool and produce from their Whangaparaoa farm (at Shakespear Bay), to the Auckland markets.

‘Frances’ was retired to the Weiti (Wade) River some thirty years ago, and in 1991 was acquired by the Cato brothers who have undertaken extensive renovation and restorative work on her, including faithfully restoring her original rig and sail plan. She is still moored and sailed out of the Weiti River / Silverdale area (2008).

Brest: the world’s largest maritime festival in photographs by Nigel Pert & Dan Houston with a … END_OF_DOCUMENT_TOKEN_TO_BE_REPLACED