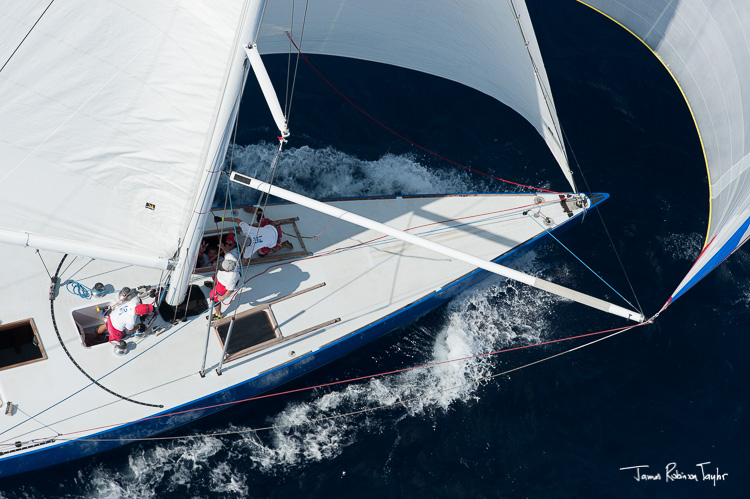 Built according to the Third International Rule for the America’s Cup in 1970.

1970 – 1976 L’Association Francaise pour La Coupe de l’America?(AFCA) (Marcel Bich) – name: France – homeport: Hyeres (France). France represents the first of four attempts of Baron Bich to win the America’s Cup. Back from the 1967 Cup, he starts with the organization of a French challenge without any limit. L’Association Francaise pour La Coupe de l’America (AFCA) is incorporated. As trial-horses he buys Kurrewa V, Sovereign and Constellation, he orders to Britton Chance and Egger the construction of Chancegger to be used as a test for the new France. Notwithstanding this important financial deployment, the results are not encouraging: France is beaten by Gretel by four to zero. Even if the hull is considered a quick one, rigging, sails and the crew have a lot of work in comparison to the Australians. She competes again unsuccessfully in the challenger trials of 1974 and 1977.

2011 France has undergone a complete refit under the Jacques Fauroux supervision at Ben Le Saout yard. the original plans by Andre Mauric have been digitized and redrawn in order to allow the yard to cooperate at a distance for the new placement of the motor, the propeller shaft, self draining cockpits and chandlery; the deck and the rudder have been reconstructed. The original mast and rigging will be kept after sanding the tube and checking the profiled rods. The mast will undergo some works to lighten the package; a new and lighter boom has been drawn to adapt the new sails plan; the forestay has been moved back to his original position and the chain plates have been redrawn. The sail area has been slightly increased: longer mainsail foot, strong roach and longer spinnaker pole.

2013 France has been relaunched on 14th April

Brest: the world’s largest maritime festival in photographs by Nigel Pert & Dan Houston with a … END_OF_DOCUMENT_TOKEN_TO_BE_REPLACED