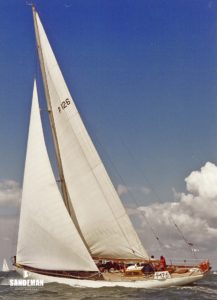 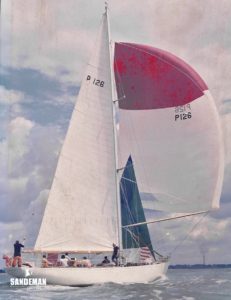 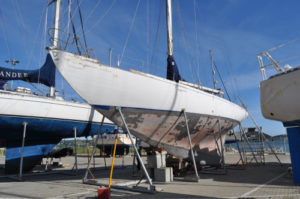 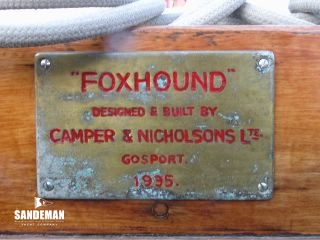 Foxhound’s racing career is remarkable however in that she was an early winner pre war and yet subsequently active for the Portuguese team in the 1973 Admiral’s Cup and Fastnet.

In her first season she took a first in the Morgan Cup Race to Cherbourg and back, second in the Bell Isle Race, third in the Dinard Race and fourth in the Fastnet. Following this Isaac Bell her owner, a wealthy American citizen living in England, accepted the offer to buy her from Compte de Gasquet.

1951 – 1954 Mrs Rachel Pitt-Rivers. Subsequently it was she, the only lady skipper in the 1956 Newport-Bermuda race, who brought Foxhound through heavy seas to finish 36th in a fleet of 88 of the World’s best yachtsmen. She then sailed the 21-year-old Foxhound back to England via the Azores. It had been during her ownership the name was changed to Foxhound Of Lepe; her home ports Cowes and Southampton.

1954 – 1969 Ernesto Vieira de Mendonça – home port: Lisbon – Back from the 1954 Bermuda Race, the yacht underwent an extensive refit with the change of the fore and aft frame structure from galvanised to stainless steel. The mast was replaced with a new aluminium one; the rig was a 7/8 sloop with double spreader; the engine was changed. In 1968 Sparkman & Stephens studied an improvement of this rig increasing the fore triangle in order to have a better rating.

1969 Antonio XARA-Brasil Nogueira – renamed her Foxhound – home port: Lisbon. In 1973 she raced the Fastnet for her second time with a rating of 44.8 without age allowance, winning the Iolaire Trophy and leading the fleet of seventeen boats. Subsequently she participated in the main Portuguese races; the Wintermantel, Salazar Trophy and Berlengas Race. In the latter – an offshore race, Foxhound held the record for the best corrected time over twenty years. Other events included the D Carlos I Cup, Infante D Henrique Cup, D Pedro V, Nicolas Franco and Walter Bush with more than 50 first places out of 200 entries.

1970 Disappeared from the Lloyd’s Register

Brest: the world’s largest maritime festival in photographs by Nigel Pert & Dan Houston with a … END_OF_DOCUMENT_TOKEN_TO_BE_REPLACED