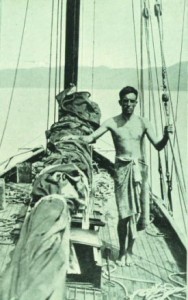 Alain Gerbault on board 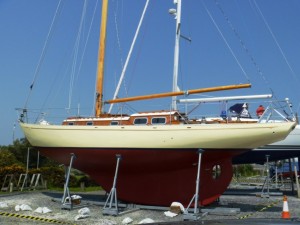 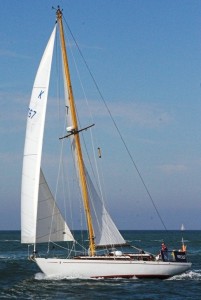 Firecrest was built for L T Daniels of Forest Gate, London in 1959 to Lloyds 100A1 to compete in RORC Class 11 racing. She proved to be a fast, successful yacht in her early years and was stationed at Burnham on Crouch.

“Her predecessor is the Carmen (of Tollesbury) built in 1956. Mr Daniels also upgraded her scantlings, like he did with the Firecrest. The Carmen is a custom built SeaSpray Class, designed by Alan Buchanan as well.” Freddie Kuiper

She was featured in Yachting Monthly in 1961.

In 1962 Firecrest was sold to A W Bourner OBE of Bassetts Manor, Hartfield who continued to sail from Burnham.

D M Stearns acquired the vessel in the late 1960’s and was to be Firecrest’s registered owner for thirty-five years, sailing out of Lymington.

The present owners bought the vessel in 2003 and have continued a constant program of maintainance and up-grading resulting in the high standard achieved at present. She had a major re-fit in 2007-08 by David Moss Boat-builder in Fleetwood with a complete photographic record of work completed.

The design is notable for the extra beam, much more than was usual at this period. She has a large cock-pit with plenty space for the crew to work the yacht, wheel steering keeps the helmsman out of the way and her extra beam allows for wide clear side deck and plenty room around the mast.

Regular surveys by Andrew Potter YBDSA, the last survey was in 2009 when he commented “This vessel has been very considerably improved and is considered to be a particularly good and attractive example of this class”.

Brest: the world’s largest maritime festival in photographs by Nigel Pert & Dan Houston with a … END_OF_DOCUMENT_TOKEN_TO_BE_REPLACED