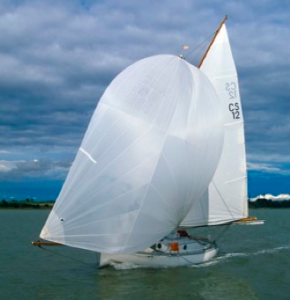 Fanny’s origin is especially interesting as it also involved two notable boats of the type: Star and Dolly Varden.  Before the mid-19th century, a young Itchen Ferry fisherman named Paskins required a new boat.  He was approached by a village shipwright who wished to build her for him as his ability as a designer and builder had been ridiculed, and he was eager to refute local criticism by building the best and fastest fishing cutter he could devise.  He built for Paskins the Star, a 21-footer with red pine planking on oak frames and beams.  She entered in the regattas and was, reputedly, never beaten, taking first prize each year while her owner continued to live at Itchen Ferry.  Mr Paskins moved to Cowes in 1853 to found a noted fish merchant business and there Star attracted attention by continuing to win the first prize in her class in the town regattas.  Her fame caused Mr Grant, then Secretary of the Royal Yacht Squadron, to request permission to have Star’s lines taken off by J.S White at Cowes, so that they could enlarge them in direct proportion to build him a yacht of the same form.
The yacht was launched in 1872 and was names Dolly Varden.  Mr Paskins took charge of her when racing and for several years he steered her to victory under Mr Grant’s colours.  In 1888 she was sold to Mr T.W Ratsey, of the noted sailmaking firm Ratsey and Lapthorn, who had admired her performance and was to continue her fame as a racer for the next half century during which she carried beautifully-setting sails and many innovations in sailmaking were tried and perfected on board her.  For several reasons she raced in the 10 rating class, her principal opponent being Nell, a similar boat built by Halliday of Cowes in 1872 and owned by General Baring.  Throughout her long and successful life Dolly Varden was regarded with affection as the heroine of the Solent fishermen and yachtsmen.

In 1872, Mr Paskins’ son Edmund was old enough to work a fishing boat himself and it was decided to have one built on the lines of Star but the length increased to 22 feet and the beam increased in proportion to 8ft 4in.  John Watts of Cowes contracted to build the boat and also the shed in which she was constructed in the owners back garden at No.1, Pelham Place, Cowes; a site now occupied by Ratsey and Lapthorn’s sail lofts.  Edmund Paskins assisted John Watts in her building, his job being to coat every piece of timber put into her with two coats of linseed oil.  On completion, the end of the shed and garden wall were removed and Fanny, as she was named, was taken on a trolley to be launched at the old town quay.  That year both Fanny and Star were entered in the town regatta and Fanny won their class by a few lengths from Star in half a gale, westerly.

From the pen of Judith Paskins – November 2013

“Our research is ongoing – we think the Edmund was in fact Edwin who was born in 1863 so he would have been 11 or 12 when the Fanny was built – I note from your website he was kept back  (from school) to linseed the wood and would have 90 years old in 1953.  His father and the boat creator was Thomas who would have worked with his 19 year old son George to build the boat which was named after his first daughter, Fanny, who sadly died in 1865 at the age of 15.”

Brest: the world’s largest maritime festival in photographs by Nigel Pert & Dan Houston with a … END_OF_DOCUMENT_TOKEN_TO_BE_REPLACED