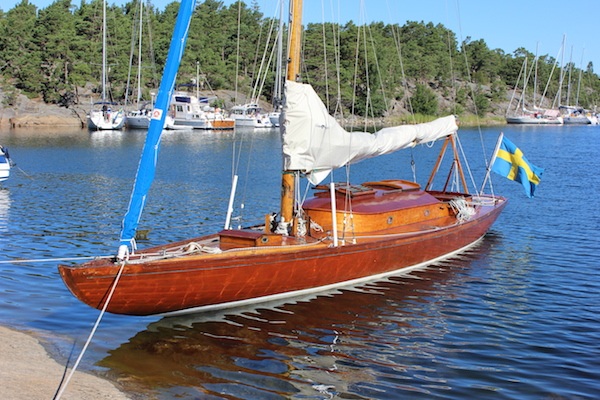 Falken is owned by Peter Lake and Kristina Lundevall, who bought her in spring 2013. During her first 100 years she has only had four owners and everyone has had the ambition to preserve instead of replace. This has resulted in Falken still retaining most of her original decor, which is quite unique.

Falken was designed with a gaff rig but it was replaced in the early 20th century to the Bermudan rig that she carries today. The mast was strongly built and in the 90’s it was re-designed by Thomas Larsson. The boom is also strong and heavy and does not need any kicker to keep the sail in place.

Norrköping was Falkens first home port where she stayed for 33 years. After that, her owners have been from the Stockholm region. Many people recognize her from Malma, Värmdö, where she spent the summer and was sometimes used as a school boat at SXK sailing school.

Today Falken is in good condition. She has an inboard engine installed underneath the self-lining cockpit and is hidden behind the steps leading down below. There it feels like going back 100 years. There are four bunks in the saloon with original mirrors still in place and a dining table for six people that hides everything in accordance with Plym’s standard.

In the summer of 2014 “it was our first year in the Classic Yacht Cup of Sweden and it became extraordinary when we won the cup”.

Falken also had a very successful year in 2015, but then discovered serious problems with the hull and subsequently spent two years ashore for a major refit. The transom and several beams were replaced. The mast and the interior have been restored.

Planning to attend the 2018 Centenarian Regatta.

Brest: the world’s largest maritime festival in photographs by Nigel Pert & Dan Houston with a … END_OF_DOCUMENT_TOKEN_TO_BE_REPLACED