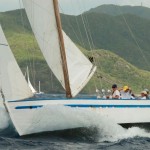 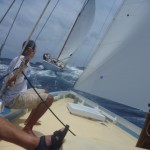 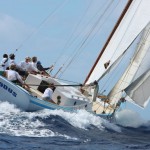 The Launching of Exodus at Windward, Carriacou Easter Sunday, 2013

Like an exotic tropical fruit, ripe and ready to be picked from the tree, she stood on the beach waiting for the launching crew to start their work. The last few finishing touches to the keel were being completed and the latest Carriacou sloop to be built at Windward was ready for launching. 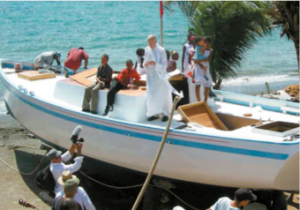 Alwyn Enoe, the proud owner and builder, and his two sons appeared really cool but no doubt well hidden were the concerns that attend the beach launch.The blood sacrifice had already been made and the foredeck was well anointed. The church congregation, fresh from their Easter Sunday devotions, arrived on the scene with the choir and priest who climbed up onto the deck to perform the blessing of the new ship using a prayer from 1886 — about the time when the first Carriacou sloops and schooners were built. The flag announcing her name was unfurled, revealing the new sloop as “EXODUS”. For a Carriacou sloop she has a finer entry and a modern more vertical blunt bow to give a longer waterline for her 42-foot length overall. 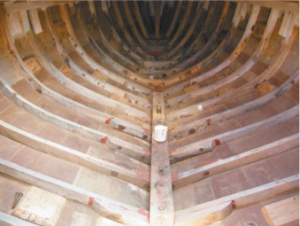 Inside the hull she is still bare. An inspection below revealed the skilled work of the shipwrights, with beautifully shaped ribs and fine planking. For the launch, four supporting staves were cut for the port side, shaped with axes to the angle of the hull, with pads nailed to the gleaming paintwork to secure them. Ropes were slung around the hull and attached to a four-part tackle and an anchor laid out in the bay. The keel was lifted with a jack and log rollers slid underneath. A wide plank was then nailed along the turn of the bilge to act as a skid, for the boat lies on her side for the launch. Planks are laid on the beach to aid the passage of the rollers. 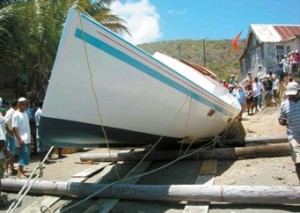 All the time the choir was singing beautifully and melodically with instrumental accompaniment from guitars and violin. When all was ready the choir processed round the boat, sprinkling rum over her as they went. Gradually and carefully the supporting staves on the port side were “cut down” with axes and the boat slowly settled onto her port side, giving a slight lurch at the end as she lay down on the sandbags. These were then slit to drain away the sand so she was resting on the skid. The skid, nailed to the boat, in turn rested on the rollers and those rested on the planks laid on the sand. All was ready for the heaving team to harness their weight to the tackle. A brake rope was secured to a strong point higher up the beach to control the speed of descent. As the team heaved, Exodus gradually slid towards the water, giving an occasional impatient run, which was quickly checked by the brakemen. The rollers and planks were re-laid as they became free and eventually the bow touched the water. With much pushing and pulling and shouting she slowly slid through the shallows and eventually floated upright in deep water amidst much cheering and applause. By this time a large crowd of locals and visitors had gathered; there was food and drink for everyone and the party started. After two years of skilled labour, and a well organized and well executed launch, Exodus lay to a mooring in Watering Bay. The whole launching process had taken a mere two hours. A tree, which is to become her mast, was carried onto the beach slipway for work to begin after the Easter holiday. Whether she will get to Antigua for the Classics Regatta this year remains to be seen. We understand that Exodus is the last sloop to be built by Alwyn and has been followed photographically by Alexis Andrews. We hope and expect that Alwyn will be there in a consultative role to assist his sons in the next building project of the Enoe family. We look forward to seeing Exodus sailing and seeing the fruits of Alexis’s photographic work. Long may the tradition of building wooden boats at Windward continue.

Brest: the world’s largest maritime festival in photographs by Nigel Pert & Dan Houston with a … END_OF_DOCUMENT_TOKEN_TO_BE_REPLACED