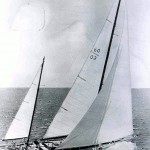 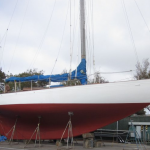 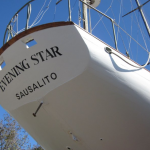 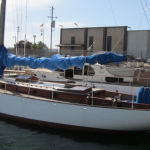 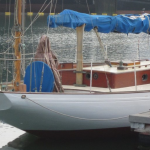 Built for Frederick Ford of Detroit.

Below are the Owner’s comments before putting ‘Evening Star’ on the market.

“We bought the boat in 2011 from the Oakland Yacht Club in Alameda at a sealed bid auction.  The boat had been neglected for several years and looked very beat up.  I looked at the lines of the hull and the fairness of the planking and noticed that there were no rust bleeders or any hogging of the sheer line.  However, the transom was rotten at the deck line and the teak deck was showing looseness by missing plugs and protruding screw heads. We won the boat at the auction and then went to work.  We had the boat towed to a boat yard and hauled out for 4 ½ months.  We stripped the hull to bare wood and re-built the transom. During the haul-out we fixed the diesel engine and shaft and plugged off 13 thru hull fittings with cedar plugs.  We also removed truck loads of horrible plumbing and wiring.

We motored the boat to a slip at a working wharf called Sugar Dock, where it is today.  We recovered the cabin top with burlap and arabol and removed all of the deck hardware.  We carefully numbered and removed the teak deck, which we saved, and then determined that the deck frame was not fixable.  After deciding to continue with the work, we removed and labeled the interior trim and doors and proceeded with the new deck frame.

The next job I was going to do was to jack up and reglue the partitions that have pulled apart, scrape and primer the interior, then scrape and paint the bilge, then reframe the cabin sole and put in new flooring except for the salon which is still good.

The salon floor has a large removable hatch for the removal of the two copper water tanks under the floor.  These tanks are in good condition and have been drained.  The boat needs new fuel tanks.

Other work needed includes repairing the interior partitions in the heads and between the engine room and the master cabin.  After the rough work, all of the interior trim and doors, drawers, cabinets, etc. could be reinstalled.

I was planning on reframing the cockpit floor to attach to the hull and remove the problem of reverse crowning.  The masts should be pulled and varnished and the rigging inspected or replaced and of course install the bowsprit and bumkin spars after varnishing.  The boat would now be essentially restored.

I expected the above mentioned work to take another year of my time and cost about $50k with me doing the labor.”

Brest: the world’s largest maritime festival in photographs by Nigel Pert & Dan Houston with a … END_OF_DOCUMENT_TOKEN_TO_BE_REPLACED