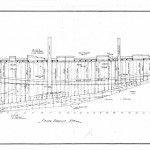 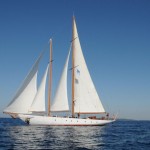 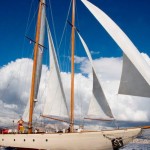 Launched as ‘Nicole Maria’ she headed straight to the Mediterranean.

Renamed Albatross, the owner at the time was so impressed by the sailing performances of the ship that he initially even wanted to get rid of the engine.

She has made several crossings over the Atlantic.

One of the former owners was an American lawyer.

In the 1990s she was bought by Italians and named ‘Eva Maria’.

There was a new owner in 2003 and in 2004 she underwent a substantial refit. The entire electric installation was renewed and several adjustments were made to give the schooner an ‘original classy appearance’ once again. During the Olympic Games in Athens, 2004, with her new name: Lion’s Pride Too was used to provide daytrips for guests and sponsors of the NOC.

Brest: the world’s largest maritime festival in photographs by Nigel Pert & Dan Houston with a … END_OF_DOCUMENT_TOKEN_TO_BE_REPLACED