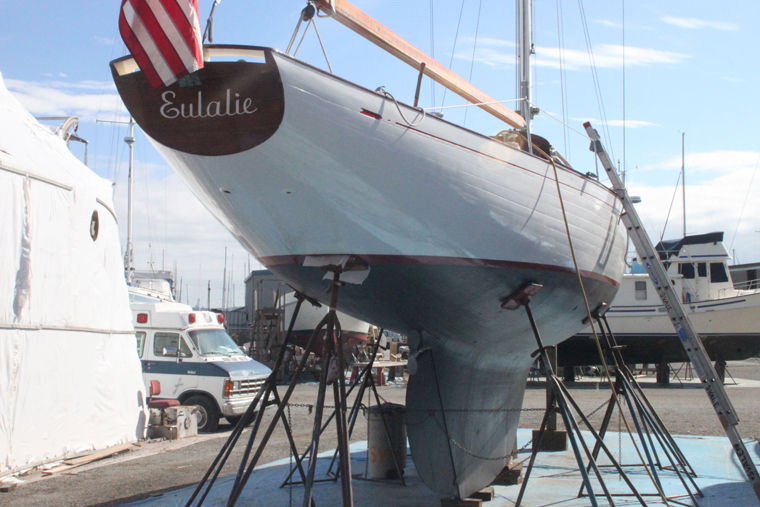 Other names that she has had over the years include: ‘Alegre’, ‘Aikahi’ and ‘Squall’.

During the Fall of 1947, Paul Kettenburg and his wife Dorothy sailed Eulalie to Avalon, Catalina Island for a weekend cruise. While anchored in Avalon, Paul came up with the K-38 concept as a boat of less cost and size that a couple could more easily handle in a cruising configuration. The first hull was launched in 1949.

G.W. “Bill” Kettenburg III, George Jr.’s son remembers racing Eulalie in a number of Southern California races against Cal 32s, which he consistently beat. Morgan Miller also crewed on a number of those races. Morgan was a Partner in Kettenburg Boat Works, and who married Jean Kettenburg, George Jr.’s daughter. Included in those races was Humphry Bogart’s larger Sparkman & Stephens designed yacht ‘Santana’, which Eulalie also beat. Bill Kettenburg remembers that Humphry Bogart wasn’t happy with loosing, and made a number of unquotable comments on that subject each time he lost. Bud Caldwell remembers after one Ensenada Race that Lauren Bacall (Humphrey Bogart’s wife) went over to the table where they were sitting and asked George “Don’t you ever get sick of winning?”, with a big smile on her face.

George Kettenburg Jr. died in late 1952. Eulalie was sold to Kenneth Croan in 1953, who re-named the boat ‘Alkahi’ (Hawaiian for number one). Per the Pacific Cruising Class Yacht Racing Association By-Laws, “The designer has the exclusive right to retain No, 1 for his own use. No other boat can be changed.” Consequently, the sail number 20 was assigned to the boat when Kenneth Croan purchased the boat.

Gil Niday bought ‘Alegre’ in 1978, and reverted to the name ‘Squall’. Gil Niday was a member of the San Diego Yacht Club, and sailed her back to San Diego. ‘Squall was then sold again in 1992.

Patrice Meigneaux bought ‘Squall’ in 1996, who retained the name and kept her in the Los Angeles area. After just 5 years he sold her to John Vallone in 2001, who re-named the boat back to her original name of ‘Eulalie’.

By the summer of 2004, Eulalie had been sitting on a metal cradle uncovered, outside the previous owner’s rented warehouse, in the parking lot of an industrial park in Salt Lake City since September 2002. The previous owner had died suddenly in March 2004. The owner of the industrial park had another person renting Eulalie’s previous owner’s warehouse, effective as of October 1, 2004. Consequently, Eulalie had to be moved by the end of September, or she would be literally cut up, and hauled away.

“I bought Eulalie in July 2004, and had her transported to Seattle. She was re-launched December 28, 2004 after five months of work to her hull. The professional restoration continued through October, 2005, when all major work was completed. The current Kettenburg Boat Works partners, specifically with the blessing of G.W. (Bill) Kettenburg III (George Jr.’s son) have allowed me to again use sail #1.”, Neil Atwood (owner 2016)

Eulalie now is sailed and raced on a regular basis in Puget Sound.

Brest: the world’s largest maritime festival in photographs by Nigel Pert & Dan Houston with a … END_OF_DOCUMENT_TOKEN_TO_BE_REPLACED