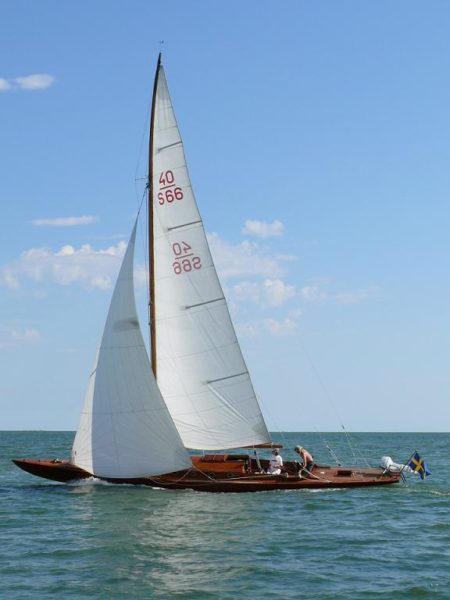 Eugenie was drafted by Erik Salander in June 1916. The client was a boat builder Hjalmar Törnblom from Västerås. Törnblom worked in 1917 in Västerås Skeppsvarv, a newly established limited company with big visions. It is unclear whether Törnblom started construction. Västerås Shipyard did go bankrupt a few years later before Eugenie was realised.

In 1921 C A Rosborg, the driving force and former chairman of Westerås Segel Company, launched the new 55sq.m as ‘Margarta III’. Rosborg retained the boat until 1927 when she was sold to Director Gustaf Hultquist in Råsunda. He called her ‘Mabel’ and let Salander draw a Bermudan rig. Mabel was registered in the KSSS as 55 S16.

In 1931 she was sold to Olof Bergståhl, a dentist and famous sailor from Strängnäs. He renamed her ‘Carita’. Ten years later, Carita was measured to a 40 square meter and received the sail number: 40 S-66.

After many years in Strängnäs, Carita returned to Västerås, when Knut Westerlund owned her. He had left her until the late 50’s when he bought a P-28. Carita was still in the harbor of Västerås for a few more years.

In the early 1970s, SSKF’s former chairman Gösta Bladh, bought her and changed her back to the original name ‘Eugenie’. She was in quite bad condition at this time with the hull covered by GRP and the interior missing. Gösta, however, retained Eugenie only until 1973 when he was given the opportunity to buy Sif, a yacht closer to her original specs.

The new owners became Jane and Ville Hofman-Bang with Pontus Frösell as partner in the first years. Eugenie was now restored.

Brest: the world’s largest maritime festival in photographs by Nigel Pert & Dan Houston with a … END_OF_DOCUMENT_TOKEN_TO_BE_REPLACED