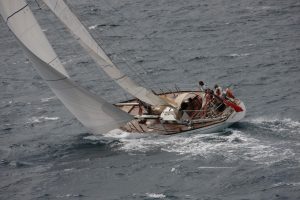 Designed by Olin and Rod Stephens ‘from the seat upwards’ she is hull no.57 from 65 Swan 43’s built. The Swan 43 was the second in the Swan range to be designed after the Swan 36. Her sister ship, ‘Case Tete’ won the Admiral’s Cup in 1972. Originally called ‘Caroan’, then ‘Gregal’, after years of French ownership she was bought by Charles Blakeney and Peter Terell in 2008.

She has the original mast and the rig is unaltered.

Won the best maintained Swan at the Swan European Cup in Porto Cervo in 2010.

“The yachts name was changed to Espalmador by the prevoius owner but one, who was a well known French sailor called Pascal Rey. Sadly he had to  sell the boat for health reasons and died the year before last (in 2015). He was very fond of the yacht and would come and visit the boat when he was in Port Grimaud where he and we subsequently, keep the boat berthed. He was a charming man and was the inventor of the Boris bike concept in Paris, several years before Boris introduced it in London. He told me, man to man, with a certain insouciant Gallic smile, that the reason why he had changed her name to Espalmador was after the very beautiful beach of the same name, in Formentera, where he lost his virginity as a young man. This clearly brought back many very happy memories.” Charles Blakeney

Brest: the world’s largest maritime festival in photographs by Nigel Pert & Dan Houston with a … END_OF_DOCUMENT_TOKEN_TO_BE_REPLACED