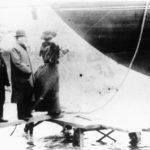 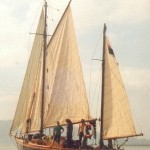 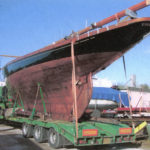 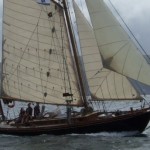 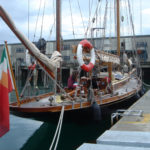 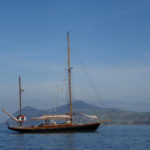 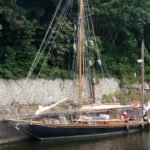 Designed and built by Sam Bond, a famous boat building family in Birkenhead at the turn of the century, Española is constructed of 11/4 inch planks (teak above the waterline, pitch-pine below) on steamed rock elm and grown oak frames. She was originally rigged as a flush-decked gaff cutter. A half model of her remains today in the possession of the Royal Mersey Yacht Club. Española’s launch on Monday, 24th. March 1902 at Green Lane, Birkenhead is recorded in the March issue of ‘Yachting’, a copy of which was obtained from the Cruising Association library at St. Katherine’s Dock, London. The original Certificate of Registry of a British Ship can be viewed at the Customs House Archives, Pier Head, Liverpool. She was launched ‘Irene II’ under the ownership of Buckley Holmes and Arthur Bradbury. Her official number is O.N. 115269.

Irene II was acquired in 1911 by H.M.Wright (‘HM’), when she was berthed at Kingstown (now Dun Laoghaire), remaining there until 1943. In 1912 Irene II was renamed Española in honour of King Alphonse XIII of Spain who raced her during his visit to the Royal Irish Yacht Club. Auxiliary power for harbour manoeuvering was provided at this time by a Brookes petrol/paraffin 7 hp engine. Española is referenced in various books, including ‘Cruising Yarns from Yachting Monthly’ c.1933 (‘The First Cruise of the Española’ c.1912), ‘Leaves From Rowan’s Logs’, and ‘To Sail the Crested Sea’ (a history of Irish yachting). Española and four other yachts from Dublin Bay took part in a cruise-in-company to south-west Ireland in June and July 1929. During the cruise, at Glengariff on June 29th, the crews announced the formation of the Irish Cruising Club. Being the senior skipper present, HM was proposed and elected as the first commodore. Whilst in Dun Laoghaire, Española flew the burgees of the Royal Irish, Royal Alfred and Dublin Bay Yacht Clubs, and the Royal Cruising Club. During this period, HM was a regular competitor in the Corinthian races, and cruised regularly to South West Ireland, the Isle of Man, North Wales and the Western Isles of Scotland. HM skippered her until a year before his death in 1943, his 86th. year.

Española was purchased in 1943 by Charles Orr Stanley (MD, Pye UK and Ireland) and was berthed at the Royal Cork Yacht Club, where she remained until 1956. She was involved in the post-‘Emergency’ (World War II) yachting scene at Crosshaven. She has since been resident in England under various owners and burgees, including the Royal Harwich Yacht Club (from 1956 to 1958, under the ownership of Ronald and Eleanor Hamilton), and the Royal Yacht Squadron (from 1962 to 1968, under the ownership of Sir Ian Lloyd). Sir Ian contributed significantly to Española’s longevity: no expense was spared on her maintenance, much of the work being carried out annually at notable yards such as Camper and Nicholson at Gosport.

Española was re-rigged as a bermudan yawl in 1959 by Peter and Jane Sartory, when a low coachroof was added to improve headroom below. The old Brookes engine was also replaced by a 14 hp Morris Oxford unit. Later, in 1972, this was changed for a 43 hp Mercedez diesel engine by Messrs. B.J. Deak and L. Lazar who owned Española from 1968 until 1978, during which time she was berthed at Newhaven.

No expense has been spared under the present owner/skipper. Española was given new wings in 1998 when she was also re-rigged as a gaff yawl. A new Betamarine 43 hp diesel engine and a new main- mast were fitted in 1999. She was extensively restored in 2003-4 at Waterfront Marine, Port Penrhyn, Bangor, North Wales. The restoration included new teak laid decks, shear strakes, counter-stern, stem and mast-step, together with overall re-fastening, re-splining, re-caulking and traditional copper sheathing. A new set of spars was added in 2008, funded by a grant from the National Historic Ships Society with which Espanola has been registered since 2000. In 2009 Espanola’s bronze keel-bolts were extracted, surveyed, and replaced as required. Her vital statistics are LOA 54 ft.; LOD 47 ft.; beam 10 ft.; draft 8 ft.; laden displacement 16 tons (including a 7-ton external lead ballast keel).

Cruises have been undertaken under the present owner/skipper to Skye, the Outer Hebrides, St. Kilda, the West Coast of Ireland, Brest, Penzance, and the Scillies, as well as regular visits to Ireland, the Isle of Man and North Wales.

Brest: the world’s largest maritime festival in photographs by Nigel Pert & Dan Houston with a … END_OF_DOCUMENT_TOKEN_TO_BE_REPLACED