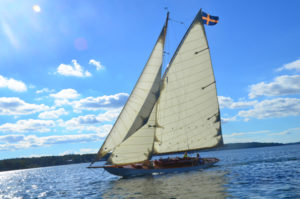 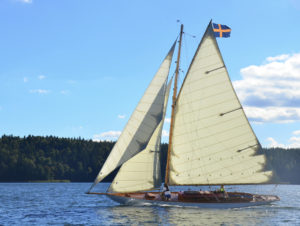 She is designed according to the ideals of the day with a deep, V-shaped centre section and an elegant stern.

The system used in 1896 was Dixon Kemp’s cube rule. It prescribes no scantlings, but the measurement is only the length of the waterline multiplied by the sail area and divided by 131. Eol got the measurement 4.8 as per the cube rule.

In the mid 40’s Eol caught fire when she was sheltered for winter storage. Parts of the decor were destroyed but replaced with a similar interior design.

Eol has never suffered from the neglect that has been the fate of many yachts. Between 1922 and 1984 she was stored in Väddö Backa shipyard during the winter months. As a result she is still in excellent and original condition.

The boat underwent a thorough renovation in the winter of 2000/2001. The last owner, Christan Bernström, put a new deck in Oregon pine.

There was no sailing in summer 2001 because the mast turned out to be bad. It had penetrated moisture why it softened and the glue from a previous renovation was released.

A new mast, with the same dimensions as the old, was manufactured in 2001 by Getteröns riggerverkstad outside Varberg.

There is a half model of the Eol at the Swedish Maritime Museum.

Brest: the world’s largest maritime festival in photographs by Nigel Pert & Dan Houston with a … END_OF_DOCUMENT_TOKEN_TO_BE_REPLACED