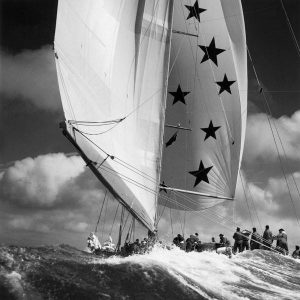 Her condition when found in 1974 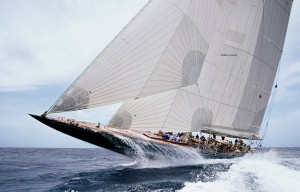 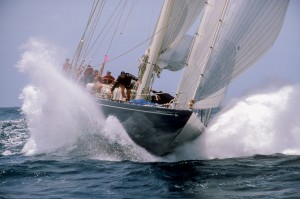 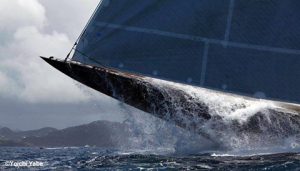 Endeavour was commissioned by Sir T.O.M. Sopwith to challenge for the America’s Cup in 1934. Having prepared his campaign in Shamrock V, Sopwith was keen to ensure that this yacht was the most advanced design possible. With his experience designing aircraft Sopwith applied aviation technology to Endeavour’s rig and winches and spared nothing to make her the finest vessel of her day. From launching in 1934 she continued her preparation by competing against Shamrock V (then owned by Sir Richard Fairey) and the newly launched Velsheda (owned by W.L Stephenson).

She swept through the British racing fleet and into the hearts of yachtsmen the World around, winning many races in her first season. Like many before her, Endeavour did not win the Cup but she came closer to doing so than any other challenger.

Endeavour pioneered the development of the Quadrilateral genoa, a two clewed headsail offering immense sail area and power, and still used on J Class yachts racing today. She also had a larger and better designed spinnaker but Sopwith was let down by poor crewing. Just prior to departure for the USA, his professional crew went on strike for more money and Sopwith was forced to round up keen amateur sailors, who had the enthusiasm but not the experience. Afterwards, she returned to England to dominate the British racing scene until 1938 when she was laid up prior to the war.

Over the next 46 years, Endeavour passed through many hands, her fate often hanging by a thread. Among other indignities, she was sold to a scrap merchant in 1947 only to be saved by another buyer hours before her demolition was due to begin. In the seventies, she sank in the Medina River in Cowes. Again at the eleventh hour, she was bought for ten pounds sterling by two carpenters who patched the holes in her hull with plastic bags and got her afloat again. In the early eighties, Endeavour sat at Calshot Spit, an abandoned seaplane base fronting the Solent. She was a complete wreck, a rusting and forlorn hulk with no keel, rudder, ballast or interior.

In 1984 American yachtswoman Elizabeth Meyer bought Endeavour and undertook a five year rebuild. Since the hull was too fragile to be moved and was miles away from any boatyard, Meyer had a building constructed over the boat and hired welders to restore the hull. Endeavour’s missing keel and ballast were rebuilt, the steel frames and hull plating repaired and replaced where necessary, and a new rudder fabricated.

The newly seaworthy hull was launched and towed to Holland where it was put on a barge and transported to the Royal Huisman in Vollenhove. There she was transformed and rebuilt by Royal Huisman’s Huisfit division in 1989 into a modern masterpeice, with all new deck, rig, sailing gear and interior.

The incomparable Endeavour was the first of the J Class yachts to be restored to her old glory and thus will always claim a special place in the hearts of the shipyard workers and yachtsmen everywhere.

The latest refit was completed in 2011 at Yachting Developments, Hobsonville, Auckland NZ.

In May 2013, the refit work was recognised when JK4 Endeavour won the Refitted Sailing Yacht Award at the 2013 Superyacht Awards.

Information courtesy of the J-Class Association

Brest: the world’s largest maritime festival in photographs by Nigel Pert & Dan Houston with a … END_OF_DOCUMENT_TOKEN_TO_BE_REPLACED