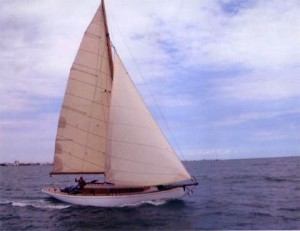 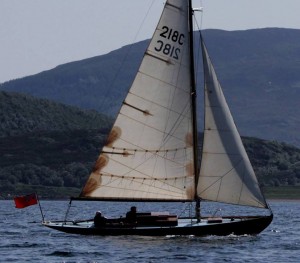 Build No. 35 from Robertsons Boat Yard. Elrhuna was built by Alexander Robertson of Sand Bank on the Holy Loch Clyde Scotland in 1904 . She was built for Robert Graham and rigged with a gaff rig. This rig was later changed to the now bermudian rig that she still has . This configuration in Elehuna dates from 1950 and the spars themselves date from 1938 when they were the spars for the 6-meter class yacht ‘Volga’, built by William Fife .

“We have no engine and there is a basic interior with no electrics, etc. She is just as she was when she was built. We understand her lines are based upon the Royal Yacht ‘Britannia’.   She is 95% original, only her deck, 4 frames and a few fastenings have been replaced, along with the upgrade to bermudan rig in the 1930’s. She is still winning races and is a dream to sail.”

‘Elrhuna’ is owned by the Watson family. 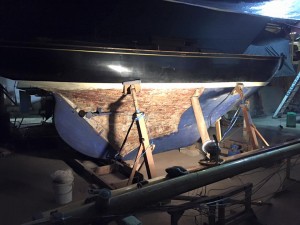 “The hull below the water line has been stripped to bare wood to check seams and fastenings and to reduce year on year paint build up . We are in the process of testing all the fastenings and replacing any that need it. So far it’s looking good. As I don’t have the time this winter the topsides will just be sanded back and given a fresh coat of paint.
The water line will be re-marked and re-aligned .
The hull seams will be filled with red lead putty and the hull will be primed with undercoat then filled and faired with our special home made fairing compound .
All bright work is being stripped and revarnished ( some of the varnish is original )
The deck is plywood which was done about 50 years ago. This is still in perfect condition and will be painted to look like its canvased … Then it’s onto bilge painting , rebuilding the exhaust system for the Dolfin twin petrol engine. And then finally onto rigging work!!”

“The original owner, Robert Graham, for whom she was built, was my great grandfather. Years after he died she passed back into family ownership when my father and his brother boat the yacht. They were not related to Robert Graham. My father used his pay-off from military service in World War II to convert her to Bermudan rig. Then later, long after he sold her, she came back into family ownership when owned by a Mr David Donald,  a cousin of my mother’s. She is a lovely, gracious looking yacht built by the best Scottish craftsmanship.” Edward Mackay

Brest: the world’s largest maritime festival in photographs by Nigel Pert & Dan Houston with a … END_OF_DOCUMENT_TOKEN_TO_BE_REPLACED