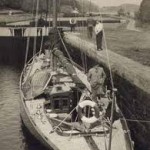 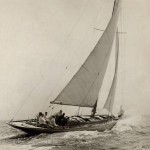 Commissioned by TE Russel who wanted a fast, comfortable racing cruiser for his growing family. The name Eilidh was chosen in memory of the owner’s niece Helen Russell (Eilidh is the gaelic name for Helen), who died in 1925 in Paris in tragic circumstances.

Eilidh won many races in the following years, and cruised extensively on the West Coast of Scotland with Tom Russell’s family. After four seasons in Scotland, the Russells decided to explore Scandinavian and Baltic waters, going to Norway, Sweden, Denmark, Finland and Estonia.
K. Adlard Coles met Eilidh anchored at “Stora Settunga” in July 1938 and recorded this memorable event in his book “Mary Ann among 10,000 islands”.

Sadly, Eilidh had to be left at a yard in Finland in 1939 and there was no chance of bringing her home. She spent the war in Norway, being sailed and well cared for by the German Luftwaffe officers. Eilidh eventually left Finland on the 6th of July 1948 and reched her home port of Colintraive on the 12th of August the same year.

In 1973 after 42 years in the Russell family, she started a new life with John Mill and his family, who used her extensively, racing her to win the Scotish Blue Water race twice.

In 2001, the boat underwent a major refit in order to restore her to her original splendor. The process took nearly 3 years. Since then, Eilidh received many awards from her participations in Mediterranean regattas and her present owners are proud of taking care of her.

Brest: the world’s largest maritime festival in photographs by Nigel Pert & Dan Houston with a … END_OF_DOCUMENT_TOKEN_TO_BE_REPLACED