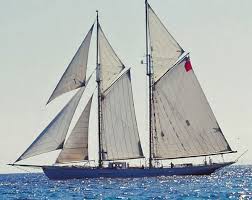 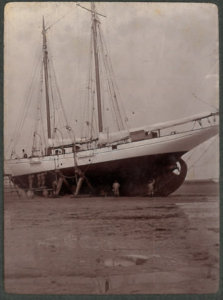 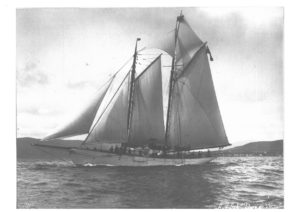 Dwyn Wen has criss-crossed the World under a succession of owners and always with the same name, that of the Welsh patron saint of lovers. Given her extraordinary voyages in distant waters, of which considerable information, with pictures and anecdotage has been collated, it would be interesting to know if she has ever ventured back into British waters since she left Weymouth on 8th of August 1924 bound for Hong Kong.This remarkable 128 ft classic schooner enjoyed a clutch of ownerships on the West coast of America – largely cruising the Pacific in the 1920s. One such cruise a 4,000 mile trip under Dr Robert Hale Ellis took 42 days during which her crew sighted nothing but whales, sharks, porpoises and seabirds.

Post War another trip from Hawaii to French Polynesia was recorded in a book by Rita Kistner, wife of her then owner. Another expedition with scientific aims undertaken in 1963 was written about in great detail in “Seismic Summer” by Marge Bradner, wife of the expedition leader – and only lady aboard.

She had a new owner in 1977 and has since cruised and chartered her in the Indian Ocean and around the Far East. She was then for sale lying in the lagoon of Mayotte at the North end of the Mozambique Channel and ready for a restoration project.

“Dwyn Wen sank in 2014 in Mayotte. She slipped her moorings and caught on a reef.” 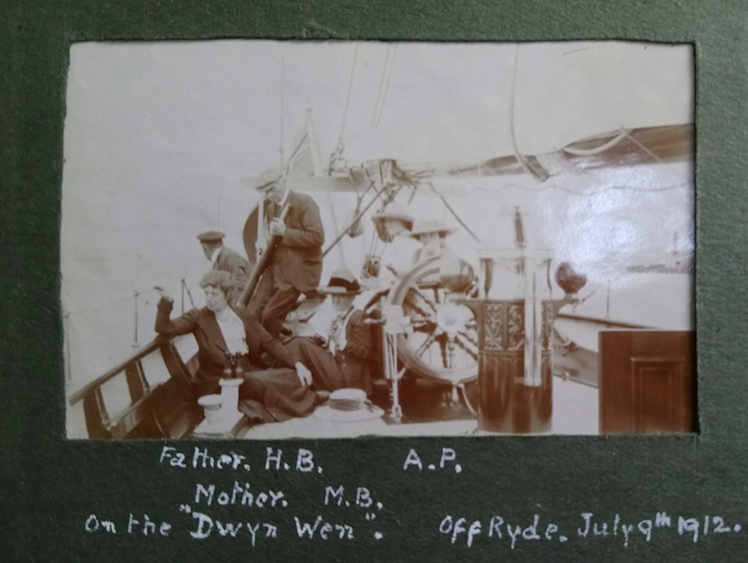 “Finally found another pic of Dwyn Wen with great grandfather Burton and family, 6 years after launch. Great Aunt Edith would have been the photographer (it’s from her album) and my grandmother was probably below deck”. Christopher Barton

“I have often thought about my time on the Dwyn Wen. Jim Walters had asked me to do the repairs on the main mast. I had free time, so I accepted. He didn’t want the work to be done in the harbor so Stan and I were to take the boat to Catalina and do the repairs there. Jim, having returned from New Zealand and Australia, had stopped at Tahiti. There he picked up a cabin boy named Timmy. The three of us boarded one morning and were about to shove off when a young man who was known as “Sketch” suddenly jumped on board. By the time we were under way it was too late to return to the dock to let him off as the channel wasn’t wide enough, so he stayed on board. Timmy was on the bow as lookout, I was at the wheel while Stan was below. Sketch sat on the deck just outside the deck house.
We were doing about 3 or 4 knots down the center of the channel after leaving the dock at Fellows and Stewarts facility when suddenly the Capitol geared transmission seized and stopped the 671 GM diesel engine. People on the windward shore noticed what had happened and shouted. At this instant, Timmy came running back to where I was quickly turning the wheel to keep us away from the leeward shore. The thought of the 13 foot keel digging into the beach caused me to immediately react. I handed Timmy my knife and told him to cut the lines holding the stay sails and get them up as fast as possible. We  needed some windage to stay in midstream. Next was like a Max Sennet comedy scene: Stan came up from below, Timmy started forward as Sketch stood up. All three collided. Sketch shouted, “What can I do??”  stand responded with, “Get the hell out of the way!”
Timmy finally started raising a staysail. As it started to fill with air, the wind was suddenly cut off by a building on the starboard shore. The onlookers were cheering us on. We had enough momentum to keep us going. The wind caught us again as we passed the large building. Hoorays echoed from shore. We were finally back mid stream again. Stan didn’t want to sail to Catalina so we dropped anchor just out side the channel. The shore boat was lowered and I went ashore to call Jim Walters and appraise him of the situation. I then returned and worked for two days replacing the dry rot with straight grained, kiln dried fir wedged planks glued and fastened in place, I finished it off, sealed and painted it.  My thoughts at the time were that this was only a bandage on a broken arm technique. Jim however was pleased with my repair.
A few weeks later Jim invited me and my wife for a trip to Catalina Island. We accepted. My lovely wife, Eva had never been on board so she was more or less excited. The thought of being on a large sail boat sounded good but she had a tendency to become sea-sick. On board I was amazed at the collection of beautiful young ladies. The wine flowed freely as every one mingled around as we pulled away from the dock. I asked Stan where these women came from. His answer was, “These ladies were Miss Universe contestants that didn’t win.” My wife got sea sick as we left the dock. The captain, Stan Reiner(sp), put her in a hammock and secured her under the main boom. This seemed to relieve some of her symptoms. She remained there until we arrived at Avalon while I enjoyed the wine and the company. I also ended up chasing Miss Denmark all over the Dwyn Wen. Don’t know what I would have done if I caught her, but it was all done in fun. Ah, those undergraduate years! I am sure that all on board had a wonderful day out on the Catalina channel, I know I did.”  Bob Dye

Brest: the world’s largest maritime festival in photographs by Nigel Pert & Dan Houston with a … END_OF_DOCUMENT_TOKEN_TO_BE_REPLACED