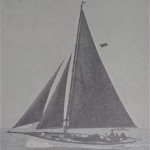 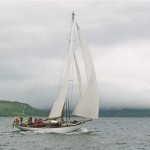 Built for Arthur Macpherson (1873-1942), who cruised to Malta and back in 1930-31 winning the Royal Cruising Club’s Challenge Cup for the best cruise of that year. Machpherson assembled a large maritime art collection now housed in the Greenwich Maritime Museum.

Subsequently bought for the nation by Sir James Caird the name Driac is derived from Caird spelt backwards.

“I have owned Driac since 2000 and have removed some un-desireable changes like planked bowsprit and wheel steering.   I installed a new engine in 2002 and am currently re-caulking the decks.

“Several of Driac’s keelbolts were drawn in early 2009 and their condition found to be excellent.   Her lower rudder fitting was replaced and some weakened iron floors repaired.   Her cockpit was completely rebuilt removing rotten softwood repairs dating from about 1980.   In 2011 six intermediate frames were renewed in laminated oak and her topsides were stripped to bare wood and repainted;  when exposed the teak planking was found to be in excellent condition.   A steady programme of refurbishment is in progress but her sails still mostly date from the late 1970s”.

Brest: the world’s largest maritime festival in photographs by Nigel Pert & Dan Houston with a … END_OF_DOCUMENT_TOKEN_TO_BE_REPLACED