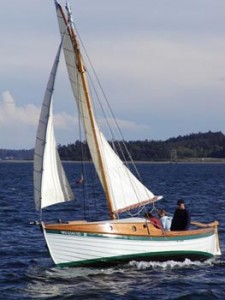 Dorjun was built for the U.S. Lifesaving Service.   Her design and hull shape are similar to the lifeboats used in Shackletons epic voyage across the southern ocean.

After being retired from the U.S. Coast Guard in 1937, she sailed through the Straits of Magellan on a trip documented in the December 1937 National Geographic.   Dorjun sank in the 1946 Portland Oregon flood, and sat abandoned on a mudbank for several years before she was rescued and stored.   In 1992, Dorjun was brought to Port Townsend for a loving restoration and re-launched at the 1992 Wooden Boat Festival. She was used regularly for WBF sailing programs until 2004.

Brest: the world’s largest maritime festival in photographs by Nigel Pert & Dan Houston with a … END_OF_DOCUMENT_TOKEN_TO_BE_REPLACED