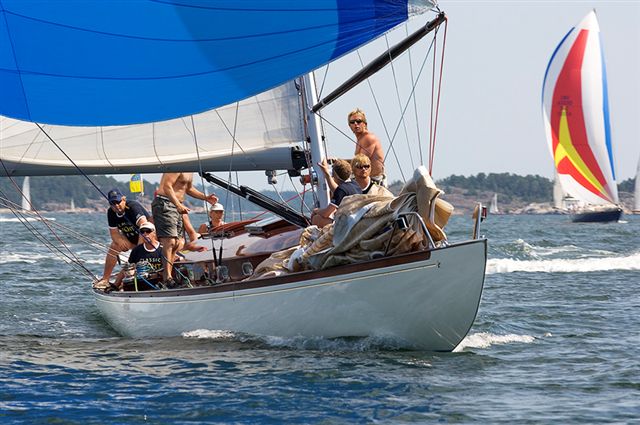 One of the “Grand Dames” of the Swedish fleet she was built to the 1918 Square-Meter rule and was impeccably restored between 1997 and 2001.

1997-2001 – Owner’s Comments – Construction ~ Hull and deck
30 mm mahogany (original) and pine (new under the water line) on original steel (every third) and oak frames. New stem- and stern posts in oak. New keel plank and deadwood in oak. Original keel weight of lead (about 4000 kilograms). New floor plates of stainless steel throughout. New deck beams of oak through out strengthened by plates of stainless steel in certain areas. New solid Oregon pine deck planking (30 mm) with plank-sheer, trimmings and bulwarks of mahogany. The cabin has new beams of mahogany, new inner lining of Oregon pine and the original outer cover of mahogany, a new skylight and the original hatch.

The underwater body is waterproofed with red lead under yacht primer and anti fouling paint. The free boards are proofed with linseed oil under white enamel paint. Deck planking is proofed with Coelan and all mahogany on the outside and in the interior is varnished. The insides of the freeboards are varnished and covered by varnished Oregon pine planking throughout. Two cockpits in mahogany (one separate for the helmsman). The main cockpit has two self bailing outlets in a GRP floor covered by teak duckboards. Forward pulpit in stainless steel.

Brest: the world’s largest maritime festival in photographs by Nigel Pert & Dan Houston with a … END_OF_DOCUMENT_TOKEN_TO_BE_REPLACED