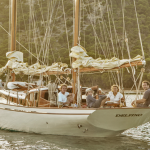 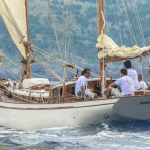 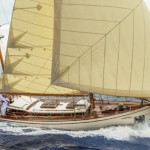 “The boat was originally comissioned by the Governor of Trieste in the late 1930’s and owned by the “Magazzini Generali”.   During WWII,  after having served as a Gentleman’s yacht to the British Admiral in Chief of Trieste, it was given to the Yachting Club “Circolo Adriaco” of Trieste where it served as the club’s sail boat until the 1950-60’s.

“Delfino was fully restored by the current owner between 2000 and 2006 after more than 3 decades of virtual abandonment.   The restoration benefitted from Sciarelli’s experties, Faggion’s interior design and Alto Adriatico’s restoration.”

Delfino was also given 2 best refit awards in 2007.

Brest: the world’s largest maritime festival in photographs by Nigel Pert & Dan Houston with a … END_OF_DOCUMENT_TOKEN_TO_BE_REPLACED