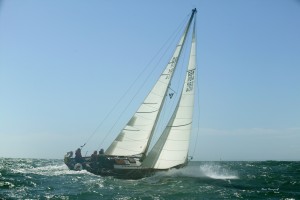 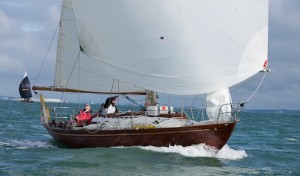 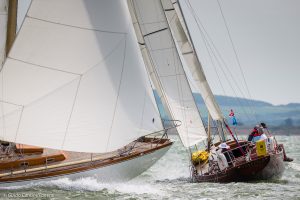 Designed and built for Bobby Lowein, a well known racing helmsman.   Lowein’s brief was for a yacht which looks well, sails well, can be eaily handled by two men yet will sleep five.   In her first season from 22 starts, Danegeld gained 15 first places, two seconds and four thirds including winnning the Gold Roman Bowl in Round the Island Race.   She was awarded Yacht of the Year and hailed by the yachting press as the most successful ocean racer since WWII. In 1964,

Danegeld was sold to a Poole owner and converted for cruising, then to an owner in Shoreham and then into the present (2012) family ownership in 1975.   Her current owner has extensively restored her to the racing condition for which she was famous and returned her to the Solent where she is well known.

Brest: the world’s largest maritime festival in photographs by Nigel Pert & Dan Houston with a … END_OF_DOCUMENT_TOKEN_TO_BE_REPLACED