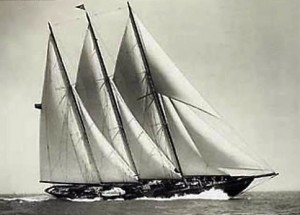 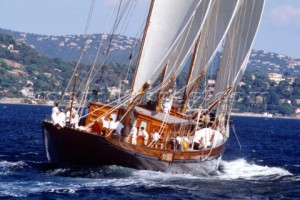 Creole was built for the American, Alexander Smith Cochran.   Launched as ‘Vira’ she was the largest yacht C&N had ever constructed.   Her Bermudan staysail rig was used so that the yacht could be sailed with limited crew who would not have heavy gaffs to hoist.

During WWII she was used by the Royal Navy and then returned to her intended use when Stavros Niarchos bought her in 1948.   He had her restored and then decorated her with prestigious paintings.   She was then rebuilt in 1958 at Howaldtwerke AG Kiel.

In 1983 Maurizio Gucci bought her and took her to be restored back at Camper Nicholsons between the years 1984-1986.   She became his pride and joy, later to be accompanied by another Nicholson design, Avel, but at 60′ overall considerably smaller.   Both yachts remain regulars on the Mediterranean regatta scene, based in Palma de Mallorca over the winter and used by the Gucci sisters during the summer months.   More recently the foremast has been replaced in the winter of 2002/3 and she regularly has work done at the Astilleros shipyard during the winter months (she has been based there for over 25 years).

Brest: the world’s largest maritime festival in photographs by Nigel Pert & Dan Houston with a … END_OF_DOCUMENT_TOKEN_TO_BE_REPLACED