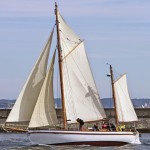 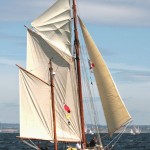 2010 – “We are planning a 70th anniversary crossing of the ” Corbeau des mers” from le Ile de Sein to Newlyn exactly 70 years to the hour that Les Corbeau made in 1940.   All the men on le lle de Sein answered the call by General De Gaulle broadcast by the BBC on 18 June 1940.   We hope to have between 10 & 15 traditional boats to accompany Les Corbeau.   The plan so far is to go to Newlyn then Penzance then Falmouth & Fowey before returning.   The event is being organised by the crew of Coronasia who are members of ANPLF (association nautique de Port la Foret ) and Mylor Yacht club.   We leave Ile de Sein on 26 june 2010 at 21.30 hrs”.

Brest: the world’s largest maritime festival in photographs by Nigel Pert & Dan Houston with a … END_OF_DOCUMENT_TOKEN_TO_BE_REPLACED